Ford to build electric vehicles in China with Zotye Auto 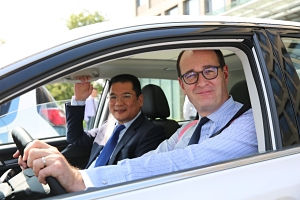 Ford Motor Company has signed a memorandum of understanding with China’s Anhui Zotye Automobile to explore a joint venture for the manufacture of a new brand of all-electric vehicles in the Asian country.

“The potential to launch a new line of all-electric vehicles in the world’s largest auto market is an exciting next step for Ford in China,” said Peter Fleet (pictured, right), Ford group vice-president and president, Ford Asia Pacific.

China is the fastest-growing market in the world for ‘new energy’ vehicles and Ford said it expected the market to grow to 6m units a year by 2025, of which about 4m vehicles would be all-electric.

The latest news follows Ford’s announcement in April that it had formed an ambitious China electrification strategy, which would include two electrified vehicles and a broad range of EVs by 2025.

The Mondeo Energi, set to be launched in early 2018, will be the first plug-in hybrid to be manufactured by the Changan Ford JV. Ford also confirmed plans to bring an all-new fully electric small SUV to China, North America and Europe within five years.

The carmaker wants 70% of all Ford vehicles sold in China to have electrified powertrain options by 2025.

Its new partner, Zotye Auto, was one of the first automakers to produce all-electric passenger vehicles in China and is currently the market leader in that segment.

More than 16,000 all-electric Zotye vehicles were sold in the year to the end of July, up 56% from the same period a year earlier.

“This presents us with an exciting opportunity to leverage each other’s strengths in achieving a win-win situation for both parties’ growth in the fast-evolving Chinese electric vehicle market,” said Jin Zheyong (pictured, left), chairman and president of Zoye Auto, which is based in Huangshan, in Anhui province.

Ford is not the only global carmaker to announce Chinese electric vehicle plans. In July, Daimler and its Chinese partner, BAIC, agreed to invest 5 billion yuan ($735m) in their local production joint venture, Beijing Benz Automotive Company (BBAC), as they prepare it for electric vehicle production from 2020.

In May, The China National Development and Reform Commission (NDRC) gave final approval for local carmaker JAC and Germany’s Volkswagen Group to jointly produce a new brand of passenger electric vehicles in the country.