Ford working with Stratasys on 3D printing of parts and tooling 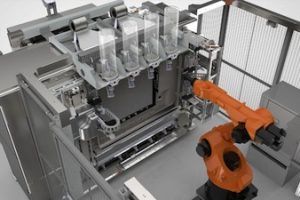 Ford has begun working with 3D printing and additive manufacturing provider Stratasys to test and develop automotive-grade 3D printed interior parts, such as side and ceiling panels, instrument panels and centre consoles.

According to Stratasys, the parts being developed could not be made by this method previously because of limitations on size. However, Stratasys is using its Infinite Build 3D Demonstrator, which can produce large, lightweight thermoplastic parts because it prints sideways.

“The system turns the traditional 3D printer concept on its side to realise an ‘infinite-build’ approach which prints on a vertical plane for practically unlimited part size in the build direction,” said Jim Orrock, vice-president, product leader at Stratasys.

At the same time, the system can be installed on a factory floor alongside existing production processes, as well as in aftermarket service centres.

According to Orrock, manufacturers could take advantage of the multi-material capability of the system to incorporate conductive traces inside panels and eliminate wiring, as well as printing out tooling that could be used in the creation of composite exterior parts, such as the spoiler on a car. He added that the Infinite Build 3D Demonstrator system was functional enough at the moment to produce sample parts for targeted applications, allowing the company to validate system capabilities and gain important feedback.

“We expect to receive feedback and finalise the Infinite Build design over the next several months, which will give us better visibility on ultimate commercial product timing,” Orrock told Automotive Logistics. “However, we do have one customer who desires to use the Infinite Build for the production of final end-use parts in late 2017.”

Tooling potentialOne of the more immediate applications for the 3D printing system is in tooling.

Orrock suggested multi-week reductions in lead times for large and complex tooling would allow design times for vehicle optimisation to be extended within today’s ever-shrinking product development cycles. In addition, the ability to produce large and complex inspection and assembly fixtures in-house should improve vehicle quality and safety on the manufacturing floor, he said.

“Next, viable production of customised vehicle components at the point of assembly for some product lines will replace some repetitive high-volume processes from other plants or suppliers, similar to the aftermarket parts use model,” he added.

For Ford, 3D printing has the potential to change automotive design and manufacturing by creating innovative efficiencies in production.

“Our vision at Ford is to make high-speed, high-quality printing of automotive-grade parts a reality,” commented Mike Whitens, director, Vehicle Enterprise Sciences, Ford Research & Advanced Engineering. “We are excited about the future opportunities that the scalable and versatile ‘infinite-build’ concept can unlock and look forward to collaborating with Stratasys to help achieve our goals.”