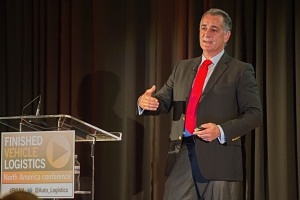 Damage and theft on Mexico's railways can be a chronic problem for carmakers in the country. One of the industry's most successful security experts suggests that tracking data and behaviour can help tackle the problem over the long term

Vandalism and theft on the rail network in Mexico continue to cost the automotive industry millions every year in damage, stolen parts, lost capacity and delivery delays.

The extent of the problem was seen in autumn last year when the Mexican government deployed the military to provide protection for the automotive industry in the Bajio region, in the centre of the country, to tackle the organised gangs targeting trains carrying automotive freight.

Carmakers have sought other solutions, such as switching to short sea shipping for some trades or rerouting around troubled spots. Honda recently made such changes for its exports to Mexico from the US, as well as for exports out of Mexico beyond the US and Canada, with a large reduction in damage following.

However, addressing such issues at their roots takes a more sophisticated, concerted effort than 'brute force' or route arounds. Rather, it comes down to careful data tracking of behaviour to tackle corruption or warnings of misbehaviour before they become entrenched. That is the approach advocated by James Kniestedt, chief executive officer of global supply chain consultancy, Gravick Group, a security expert who worked with Kansas City Southern de Mexico (KCSM) for the last 16 years, and brought operating costs associated with vandalism, theft and service disruption down by $10m, with a further $1m expected to be saved this year.

His work is part of the reason that carmakers in Mexico, including American Honda, have praised KCSM for the class one railway's security apparatus.

Kniestedt told delegates at the recent Finished Vehicle Logistics North America conference in Huntington Beach, California that the key to tackling the problem over the long term has been data integration and social network analysis. While military intervention may have been effective temporarily, he suggested that even when state coercive resources are deployed effectively around a troubled spot, it often results in the problem being pushed to another area.

“If you build a military cartel or barracks, it is not going to affect any positive change, it is only going to make it more difficult for you to adapt to [the underlying problem],” said Kniestedt, who pointed to the high mobility and coordination of organised crime groups operating in Mexico.

“How are you going to deal with it when it is 200km up the rail line? These groups are sophisticated and nomadic and they have the ability, as we have seen in the Bahia region where the army has been assisting, to leapfrog to another location.”

According to Kniestedt's analysis, the problem of vandalism is a problem of organised crime, but which is divided roughly between three tiers and with extensive links.

The first operates under the umbrella of a cartel that pays to operate and control a particular territory and hires sophisticated groups that are technologically oriented and use social media networks to organise. The second tier typically involves corruption among the police at state or local levels, who employ gangs of thieves. The third is migratory and indigent, and involves gangs from such places as El Salvador and Honduras, who have migrated to Mexico are making their living by robbing trains in the Bahia region.

There are also other groups on this level who are able to penetrate high ranks within a union or train crew, or simply have the working knowledge of the rail environment from former employees, which enables them to vandalise signals and force trains to make emergency stops.

“At the end of the day you have transnational crime syndications, you have organised crime and you have a lower level of crime that is organised on a municipal or state level,” he added.

Kniestedt suggested that the solution lies in training people to use sophisticated mobile apps and social network analytics, which at the same time covertly monitor the performance of the employees using them to avoid corruption.

“We develop smart apps for all of the security, transport and engineering personnel on the ground who also have access to training,” he explained. “We can modify their behaviour to be more successful through the applications and reporting processes used through their handheld devices. [KCSM] is the only railroad in the class one groups that is taking that technology forward to put it into the hands of the people working in the yard.”

Influencing this behaviour has improved over time thanks to new technology. When Kniestedt started working with the rail provider back, few employees were empowered to work with the type of technology necessary to track and improve behaviour.

“When I started there, getting them to take a photograph and upload it to an email was a task because they didn't have email,” he said. “There was no way to maintain accountability so my first challenge was to create a good leadership model and a culture that would allow an environment of success to exist.”

Things have moved on a lot over the last 16 years. The company now uses 'Home Files' that detail the behaviour patterns for the life of the train. If it is an OEM dedicated or intermodal train, KCSM knows how it is going to behave because the same crew runs the trains and they have the same security elements at fixed points, fixed patrol routes, and the same supervisors.

"If you build a military cartel or barracks, it is not going to affect any positive change... These groups are sophisticated and nomadic and they have the ability, as we have seen in the Bahia region where the army has been assisting, to leapfrog to another location" - James Kniestedt, Gravick Group

“We are able to develop counter measures based on that timely accurate reporting, said Kniestedt. “We gather Home File information when there is vandalism and integrate with the rule of law and figure out how we get a successful conviction. We average around 200-plus detainees with some form of sentencing, whether it is 30 days or up to seven years. The consequence is yielding good results.”

It is also important to determine when to take action because there is a fine balance between the level of risk the rail company board is willing to accept and customer satisfaction. The metrics of the throughput and what is detracting from transport have to be balanced because stopping a train that has had material stolen can be costly in terms of network capacity.

Overt and covert filters

The degree of sophistication involved in the human interaction with the technology being used to monitor train security is high, even if the full extent of surveillance capability is not necessarily obvious to the employees using it.

Kniestedt explained that at KCSM, the reporting applications used by the employees have a series of fixed filters. There are overt filters that are open which everybody knows and has a protocol to fulfil using them.

The technology on the smart phone has the ability to report anomalies and create accurate intelligence. It integrates the databases with traffic and track chart information and everything done at the transport centre can be monitored through the security applications.

The “greatest miss factor” was the human element, Kniestedt explained, and that without constant due diligence through the technology being deployed problems with corruption could escalate quickly. He chartered a course of how corruption could develop over a short time to kidnapping and extortion.

“In six months you have collusion and in 12 months you have significant theft loss,” he said. “After the 18 month mark you have kidnappings where [perpertrators] are grabbing somebody because the theft is so great they are afraid they are going to get caught, so they kidnap and extort that way. That is generally the trend when you are operating in Mexico without the required security investments.”

Corruption is part of the operating process according to Kniestedt and KCSM deals with it in an effective and controlled manner. However, the freight rail operator is part of a wider rail network in Mexico and the integrated rail partners operating there are between 15-20 years behind on their technological approaches to a security model, warns Kniestedt.