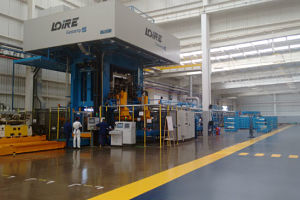 Component manufacturer Gestamp has announced completion of its seventh plant in Brazil with the construction of a metal-stamping line in Betim.

It will supply Fiat Chrysler’s (FCA) local facility in the region, which produces Fiat Palio and Siena models.

The €24.9m Gestamp plant, currently undergoing test runs, is equipped with laser cutting and assembly cells, and will manufacture structural and body parts. It is the company’s 75th stamping line globally.

The facility will be ready for mass production by the Brazilian summer and will employ 82 people.

Francisco Riberas, president and CEO of Gestamp, said: “Our presence in Brazil, through plants currently in operation and the new one that we are announcing now, will allow the company to grow in anticipation of the country's economic recovery.”

However, while Brazil has fallen from being the fourth biggest automotive production base worldwide to a current position where it is challenging to stay in the top ten, a number of speakers at the Automotive Logistics summit in December suggested it was time to instil new thinking in the supply chain and build in greater efficiencies to make the most of the recovery over the next 5-10 years.

“After a fall in volume since 2014, it is expected that vehicle manufacturing in the country will begin growing again from 2017,” said Gestamp.

The company, which recently listed in Spain, has 99 manufacturing plants in 21 countries, with another 9 under construction. Turnover in 2016 totalled €7.55 billion.

In December, it announced construction of its first plant in Japan for the supply of hot-stamped parts to the domestic market.