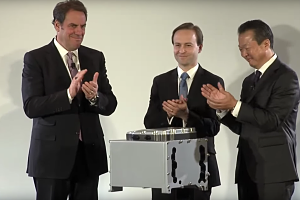 Global carmakers General Motors (GM) and Honda have taken their co-development agreement for fuel cell systems to another level, announcing an agreement targeting production by the start of the next decade.

The two companies, which first signed a ‘master collaboration agreement’ in 2013, are to invest a total of $85m in setting up the automotive industry’s first manufacturing joint venture for the production of hydrogen fuel cell systems.

Toshiaki Mikoshiba, chief operating officer for Honda’s North American region and CEO of both American Honda and Honda North America, said: “Over the past three years, engineers from Honda and GM have been working as one team, with each company providing know-how from its unique expertise to create a compact and low-cost next-generation fuel cell system.”

The newly created entity, Fuel Cell System Manufacturing, will be housed within GM’s existing battery pack facility in Brownstown, Michigan. A production start date of around 2020 is being targeted.

Mikoshiba told an audience in Detroit: “At this stage in the advancement of the technology, it is more efficient to have one operation building the fuel cell system for unique vehicles to be offered by each company.”

In December, Honda began delivery of its third generation fuel cell vehicle in the US with the Clarity model. The Clarity fuel cell received the best driving range rating from the EPA of any electric vehicle without an additional combustion engine, with a range of 366 miles (585km).

The company’s goal is for electrified vehicles (including hydrogen fuel cell vehicles) to make up two-thirds of global sales by around 2030.

Mikoshiba said hydrogen fuel cells were a favoured electric car solution due to driving performance and a refuelling experience that was similar to traditional petrol vehicles.

“GM and Honda will continue to work together to further advance refuelling infrastructure. This remains a critical step in the long-term viability and consumer acceptance of hydrogen fuel cell vehicles,” added Mikoshiba.

The two companies have collaborated before with a powertrain cross-supply arrangement in 1999. Honda manufactured 50,000 V-6 engines for the Saturn VUE and in return received diesel engines from GM’s Isuzu affiliate for use in Europe.