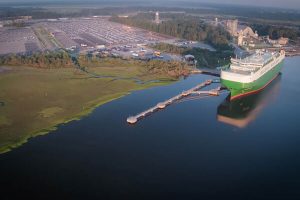 Georgia Ports Authority (GPA) has announced it will be adding 24 hectares (60 acres) to support vehicle handling at the port of Brunswick over the next 12 months, creating 8,250 car parking spaces. It also said it would be doubling dockside rail capacity for building loads for inland distribution.

GPA is also planning a new cross-terminal road linking three vessel berths, and a new access road between the docks and the south of the Colonel’s Island vehicle terminal. It said the improvements would offer a more direct route to existing vehicle processing lots.

According to the plans outlined at GPA’s Brunswick State of the Port event last week, by 2019 the port authority will have more than 220 hectares of leasable space for vehicle processing at the Colonel’s Island terminal. Current annual capacity in Brunswick (and the adjacent port of Savannah) is more than 800,000 units, and the company reported that between October 2017 and the end of September this year it handled 630,000 passenger cars, trucks and tractors.

In terms of passenger cars, the port handles volumes for leading carmakers including Mercedes-Benz, BMW, Hyundai, Kia, Porsche and Volvo. In addition, last year it boosted volumes with new business from Honda adding 34,700 units to overall throughput. GPA said it planned to use an additional 160 hectares to bring annual throughput capacity to 1.5m vehicles in coming years.

“By tonnage, Brunswick is already the second busiest ro-ro port in the nation, behind only Baltimore,” said GPA’s executive director, Griff Lynch. “As business grows to fill our expanding terminal, the port of Brunswick will play an even larger role in the global trade in vehicles and heavy equipment.”

With regard to the expansion of its rail services at Brunswick, GPA said the port would be able to build up longer unit trains on the terminal, equal to more than 3,000 metres, making direct services over longer distances more attractive. Supported by rail freight providers CSX and Norfolk Southern, Brunswick will be able to expand inland services west of the Mississippi and into the Mid-West of the US.

In terms of volumes already moved west, 16,000 of the total units handled for the last fiscal year went to California, while more than 4,500 were sent to Texas.