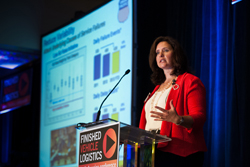 Linda Brandl (pictured) has left her role as vice-president and general manager of automotive at Union Pacific, and moved to a similar position overseeing the US rail provider’s coal commodity group. Brandl took up the new role at the beginning of February.

Brandl is now responsible for managing Union Pacific's coal and petroleum coke shipments, including coordinating the operation of the network to provide coal deliveries to customers.

Brandl was in the previous role since 2011, and has held various positions during her tenure with Union Pacific since she joined in 1988, including assignments in automotive, chemicals, coal, the national customer service center, Union Pacific distribution services, and premium operations.

Jennifer Hamann has replaced Brandl in the role heading the automotive sector. Hamann was previously general auditor of the corporate audit staff. She has been with Union Pacific since 1992.

Brandl’s wide experience will be brought to bear on a commodity sector that has seen some significant drops in revenue during 2015, a loss shared by other North American class 1 rail freight providers.

At Union Pacific, revenue from coal in Q4 dropped by 31% to $745m compared with the same quarter in 2014. Across the whole year that meant a 22% drop to $3.2 billion. Coal was the sector that showed the biggest drop for the year. Automotive, meanwhile, was the only sector that showed growth for Union Pacific, though at just 1% in Q4 to $549m, and 2% across the year to $2.1 billion.https://automotivelogistics.media/news/rail-companies-look-at-automotive-as-coal-revenues-plummet

Read more about how North American rail providers are looking to make the most of gains in the automotive sector in the face of commodity losses elsewhere in next edition of Finished Vehicle Logistics magazine.