Renault Trucks is taking the next step in its efforts to introduce more recycling to its operations with the establishment of a disassembly plant in Lyon-Vénissieux, France. 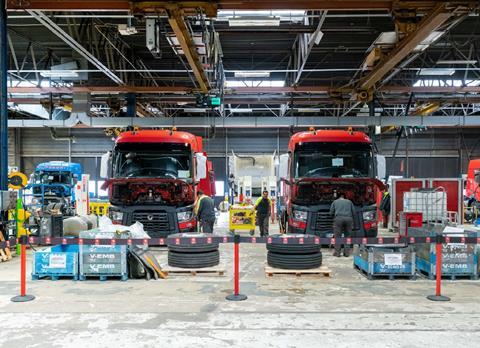 Called the Used Parts Factory, the 3,000 sq.m facility will be dedicated to breaking down trucks, disassembly now a key part of the lifespan of its vehicles. In the process of stripping trucks, usable parts will be reintroduced to market as used spares and other parts will be recycled.

This follows on from a programme to avoid waste first announced in 2020, when Renault Trucks first announced it would be using parts from heavy goods vehicles (HGVs) as spares. The company set up a Used Trucks Factory in Bourg-en-Bresse in France in November last year. The workshop extensively refurbishes regular long-distance tractors into rigid trucks and vehicles that need to be adapted to more severe conditions, such as handling worksite terrain or extremities of weather.

Search and strip
When end-of-life trucks enter the new Used Parts Factory, those parts that are fit to be reused will be stripped from the vehicle by Renault Trucks operators. That includes the engine, gearbox, cabin, fuel tank, bumpers and deflectors, as well as other parts depending on the model. All Renault Trucks’ vehicles and components are intended to last for 1.5m km and parts more recently fitted to a high-mileage truck can be easily identified as candidates for the spare parts programme.

Once removed, the parts are checked, cleaned and then listed as any newly manufactured spare part would be, before being introduced into the overall spare parts ecoystem via the nearby Renault Trucks spares facility.

The rest of the truck is then broken down. The metals are recycled to be used in manufacturing new trucks. Some parts, such as easily removable rails, are immediately removed, cut up and sent to a local foundry. Other parts may require more complex processing to be able to be re-used in manufacture.

Every spare part from the factory will be covered by Renault Truck’s factory warranty, as with newly manufactured spare parts. However, they will be sold for 50-60% less than a brand-new spare part, incentivising re-use on parts that still have plenty of road life.