It's export or die for UK car industry 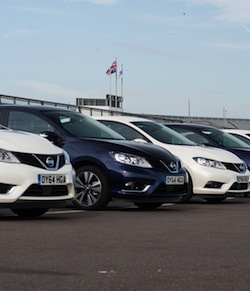 Looking at the pattern of production and trade in the UK car industry there was one straightforward message that came out of the automotive industry meeting held today (November 5th) by Nissan and Sunderland City Council in London – export or die.

Presenting the report he was commissioned to write by the Council at a meeting room in the House of Lords, Professor Garel Rhys CBE, of the Cardiff University Business School, highlighted that the car sector in the UK today was very different to what it used to be, something clearly seen in what was made here and what was actually bought.

“We export 80% of what we make and 85% of the cars sold in Great Britain are imported,” said Rhys. “That is going to remain the case because most of our industry is based on single plants which make on average only one or two models. The dealers have to fill showrooms and they have to bring models in from abroad.”

Equally, said Rhys, the specialists can only find a viable sized market if they “massively export”.

His findings make for positive reading for those transport and logistics providers responsible for importing and exporting finished vehicles.

One prime example in the UK is Nissan, which this week marks the milestone of producing 2m Qashqai’s off the line at its Sunderland plant, which by assembly volume is the UK’s largest ever plant. However, 73% of the vehicles made at Sunderland, which also includes the Juke, Note and Leaf EV, are sold abroad in 132 countries around the world. The flip side of that is that there is also security in not being over reliant on the home market.

“It gives strength because if only 20% is going to home market we are not dependent on it,” said Rhys. “You are in an industry that spreads its sales everywhere. To often you can be too reliant on the home market and when that goes down you are in trouble. That doesn’t happen now.”

This is reflected in another announcement from Nissan: namely that the Infiniti Q30 will be made exclusively at the Sunderland plant from next year, and will be exported around the world, including to Europe, North America and China. The Sunderland plant could approach its 550,000-unit annual capacity once full production is achieved on this model.

Producing vehicles with a global appeal is crucial for manufacturing in the UK and something that Honda in Swindon needs to quickly adopt if that plant is to survive, suggested Rhys.

The ‘Big Two’
One other feature of the UK car industry today that differs to what it did as recently as 2005 is that the market is dominated by two main carmakers: Nissan and Jaguar Land Rover (JLR). Last year Nissan produced almost 502,000 vehicles while JLR made almost 418,000, a combined output of around 926,600, or 61% of all production in the UK (According to Rhys, JLR is likely to soon exceed Nissan UK’s output since it is expanding its three assembly plants in the UK).

It is these two carmakers that are going to deliver most of what is needed to push the UK to record levels of annual output exceeding 2m, of which exports are going to continue to make up the great majority.

A final example of why exports are so important to the country’s manufacturing was seen in the survival of Vauxhall’s Ellesmere Port facility in the UK over the Opel Bochum facility in Germany.

“The Germans were desperately trying to close Ellesmere Port to keep Bochum open,” recalled Rhys. However, with some good collaboration between the government, unions and management that fate was avoided; but there was an additional reason for this:

“The Opel people made the mistake of thinking they did not have to close any plant in Germany, and that they would export,” said Rhys. “But to where were they going to export? Opel had not exported out of Europe for 35 years.”

The UK is now in a different position, with a well-established export market for its leading international producers.

“The UK motor industry is export-led par excellence,” said Rhys in his report. “This reflects the activities of all the car firms in that industry. They must export or die.”