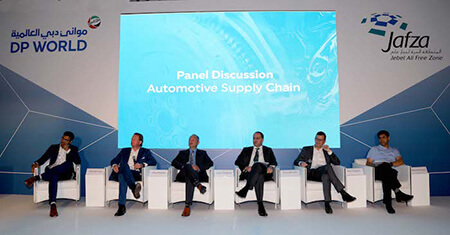 Around 11% of Jafza’s customer base is accounted for by the vehicle and transport sector, encompassing 546 automotive companies from 62 countries, providing employment to 8,200 people.

“The encouraging performance of the sector underlines Dubai’s position as the preferred logistics and distribution centre for the automotive industry in the region,” said DP World’s chairman and CEO, Sultan Ahmed Bin Sulayem. [mpu_ad]“The industry has been an integral part of our success story and [we] thank all our customers for their continued trust in us.”

In 2017, around 1.1m vehicles moved through Jebel Ali Port in the United Arab Emirates (UAE), either as ro-ro cargo or in containers.

CEO and managing director of DP World’s UAE region, Mohammed Al Muallem, attributed the port’s success to its integration with the free zone, which he said was both the most efficient in the region and supported by multimodal connectivity.

Forecasts by BMI Research suggest there will be 4% growth in automotive sales in the UAE in 2018. For the Middle East and North Africa region as a whole, BMI predicts growth of 7.3%, with commercial vehicle sales being particularly prominent. In the Gulf region, growth of 2.9% is expected.