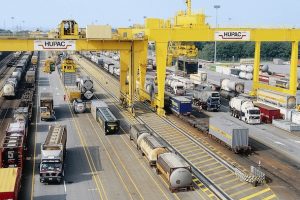 Kuehne + Nagel (KN) has expanded its Eurasia Express rail service to take shipments between China, South Korea and other Southeast Asian countries to Europe. It said its service from Changchun in northern China, which connects weekly to Hamburg in Germany, would be attractive to automotive customers, and that the wider expansion was being driven by the sector.

“The expansion of KN Eurasia Express is mainly driven by the growing demands of the automotive industry,” a spokesperson for the company told Automotive Logistics. “That's also why we now offer shipments from Japan and South Korea.”

There has been strong interest over the last few years in rail services between China and Europe, and use among automotive manufacturers and logistics providers is rising.

Last year a total of 1,700 trains moved between China and Europe, according to official figures presented at the Automotive Logistics China conference earlier this year by Zhang Xiaodong, professor of traffic and transportation at Beijing Jiao Tong University. Those services are being supported by China’s One Belt, One Road initiative, which is designed to boost infrastructure and trade links with Europe, Central Asia and Africa, including through better overland road and rail connections.

Earlier this year, Kuehne + Nagel signed a two-year agreement with Volkswagen FAW Engine (Dalian) to manage the inbound logistics operations at its Dalian and Changchun plants from 150 automotive engine part suppliers around the country.

In another first, the company said it was also offering shipments between Japan and South Korea, as well as destinations in Europe, as a combined sea and rail service. It is also extending the KN Eurasia Express service to include Southeast Asian countries that are connected via its existing overland transport network in the region.

Kuehne + Nagel said it could now link more than 50 collection points in China with more than 20 destination points in Russia, via the Vorsino central terminal in Moscow, for LCL (less than container load) rail shipments.

Transit times to Moscow are a maximum of 24 days – approximately half the time it takes for shipments by sea to arrive. The company also reported the first direct rail link between Xian in China and Kouvola in Finland. The transit time is approximately 14 days.

“We're expanding [the KN Eurasia Express] to include commercial centres in northern China, South Korea and Southeast Asia,” confirmed Otto Schacht, KN International board member responsible for sea freight. “As the first logistics provider to offer consolidated LCL shipments between China and Russia, we're connecting two of the largest economies in the world.”