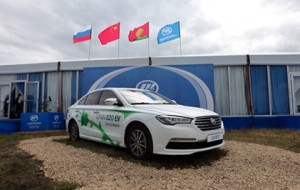 Chinese carmaker, Lifan Motors, has broken ground on a new $300m facility near the Russian city of Lipetsk, just over 400km southeast of the capital Moscow. The plant, which is planned to be operational by 2017, will make vehicles, initially from complete knockdown (CKD) kits, shipped in from Lifan’s Chongqing plant.

Currently, Lifan vehicles for the Russian market – namely volumes of the Lifan 320 – are assembled from semi-knockdown (SKD) kits and made under contract by local vehicle maker, Derways Automobile, at its plant in Cherkessk. Assembly began there in 2011.

The company said that annual production capacity would start at 60,000, built from the imported kits, but that ultimate capacity target was 200,000 and that the vehicles would be built from scratch with a greater degree of localised parts. It added that it expected to bring an electric vehicle to the market in the near future but did not provide any further details.

Lifan has 156 dealers in Russia and could use the country as a stepping stone to further expansion into the Commonwealth of Independent States (CIS).

Last year Derways announced it was planning to build a $500m assembly plant in the Chechen Republic, in the south of the country, that would assemble light commercial Chinese vehicles from CKD kits. Construction in the town of Argun was set for 2015 though no further details have been announced since then.