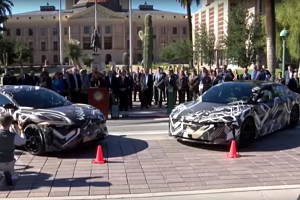 Electric vehicle start-up Lucid Motors has announced Casa Grande, about 80km south of Phoenix, Arizona, as the location for its manufacturing centre, after evaluating over 60 sites in 13 US states.

Speaking at the official announcement, Arizona’s governor, Doug Ducey, said: “In Casa Grande, Lucid acquires a strategic location that offers existing infrastructure, a talent pool that is strong and a short plane ride from their headquarters [in Silicon Valley, California].”

Claudia Pavlovich, governor of the neighbouring state of Sonora, in Mexico, highlighted the cross-border supply-chain activities that will be possible once the plant is up and running.

“Lucid Motors is going to be located in Arizona and will be supplied in part by companies located in Sonora.

“Today’s announcement will impact, deeply, our region, composed of two federal entities in two different countries, working together to attract business to the region. The economic teams of Arizona and Sonora have been working as a single team for several months to make this project happen,” added Pavlovich.

Director of global manufacturing Brian Barron is overseeing the company’s factory development. His career includes 18 years with BMW in South Carolina and Germany, where he was responsible for thousands of employees, hundreds of workstations and dozens of assembly lines.

Peter Rawlinson, the company’s chief technology officer, introduced the two alpha prototypes at the event (pictured) and spoke about the yet-to-be-launched first model.

“This is going to be a fine driving machine –1,000hp, all-electric, it will have cutting-edge technology and we will offer a version with up to a 400-mile range,” he said.

Rawlinson was formerly the vice-president of vehicle engineering at Tesla Motors and chief engineer of the company’s Model S, leading the engineering of the Model S from clean-sheet to production readiness, according to Lucid.