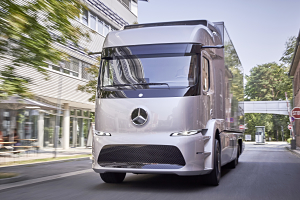 MAN Truck & Bus, which is owned by Volkswagen Group, and an Austrian consortium, the Council for Sustainable Logistics (CNL), have reached agreement on the joint development and testing of fully electrically driven trucks.

A trial of nine fully electrically driven MAN distribution trucks will be being tested in everyday operations, as soon as this year, by contract car manufacturer Magna Steyr and the logistics companies Schachinger, Quehenberger and Gebrüder Weiss. Trials are also being conducted by retail companies including Hofer, Spar and Rewe, food wholesaler Metro, and the Stiegl brewery.

The vehicles will be developed at the MAN plant in Steyr.

The first small run of production is scheduled to be produced at Steyr at the end of 2018, and in early 2021 MAN will start series production of electrically powered trucks for urban distribution.

Meanwhile, Daimler's Mercedes Benz Trucks will be supplying its eTruck (pictured), together with a special charger to certain customers this year to use for a period of twelve months and supported by Mercedes-Benz Trucks’ road testing department.

Mercedes-Benz head of trucks, Stefan Buchner said: “We are currently talking to around 20 potential customers from the disposal, foodstuffs and logistics sector. With the small series we are now rapidly taking the next step towards a series product.”

The customers are said to be located in Germany and other parts of Europe.

Mercedes-Benz Trucks revealed the heavy-duty Urban eTruck at the International Commercial Vehicle Show. It claims a payload of 12.8t and a range of 200km.

The company is targeting 2020 as the year the model will be available to the market.

“During this time the use profiles and areas of application will be recorded and the knowledge gained and expectations compared,” said the company.

BMW is already using a 40-ton truck powered purely by electric to deliver inbound parts to its Munich plant in a partnership with German logistics provider Scherm Group from a logistics facility 2kms away.