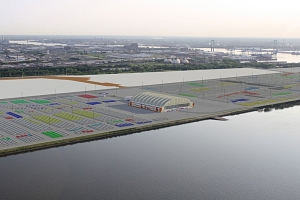 The US state of Pennsylvania is investing $93m in the port of Philadelphia's finished vehicle terminal to more than double annual import capacity there to 350,000 vehicles. The move is part of an overall $300m government investment in infrastructure, warehousing and equipment at the port.

The capital investment programme was first announced in November last year by the administration of governor Tom Wolf and will continue through to 2020. It is the first major capital investment into the equipment and infrastructure at the port for four decades and could eventually push the port into one of the top 10 for vehicle handling in North America.

Wolf said the move would have “major economic impacts” throughout the state. “This capital investment programme will give the port of Philadelphia the tools it needs to improve its competitive position and create thousands of family-sustaining, middle-class jobs while increasing state revenues,” he suggested.

The port authority said part of the funding would see a former seaplane hangar converted into a second vehicle processing centre for Hyundai-Kia, along with the addition of 155 acres (63 hectares) for vehicle storage and handling at the former Navy Yard. State investment will be supported by private investment in the vehicle handling facilities at the port.

Philadelphia currently handles around 160,000 imported vehicles per year for the Korean carmaker, with services provided by Glovis America. No vehicles are currently exported. It first started handling Hyundai-Kia volumes back in 2010 when the carmaker switched imports there from the ports of New York and New Jersey, and Baltimore.

Up until now, vehicle volumes have been unloaded at the Packer Avenue Marine Terminal (which handles containers) and moved to a vehicle handling facility at Pier 98. The conversion of the 63 acres at Navy Yard will mean vehicles can be directly unloaded onto a dedicated auto handling facility.

Ro-ro services to Philadelphia include weekly shipments from Busan in Korea and Veracruz in Mexico, both provided by ocean forwarder Eukor.

Among the other investments planned for the port, $188m will go towards doubling annual container handling at the Packer Avenue Marine Terminal from 456,000 to 900,000 TEUs. The plans include a deepening of berths to 45ft (13.7 metres) to accommodate larger vessels and the installation of four post-panamax cranes.

The port is also forecasting a 21% increase in breakbulk cargo from a $12m state investment that it said would improve warehouse capacity, add a mobile harbour crane, and fund improvements to allow cargo to be loaded onto rail cars in inclement weather.

The port authority said the overall investment would increase direct jobs by 70% percent to almost 5,400. Total employment at the port is projected to increase to more than 17,000, and state and local tax revenues should increase from the current $69.6m to $108.4m annually, stated the port.