Mercedes-Benz invests in plants in Poland and Russia 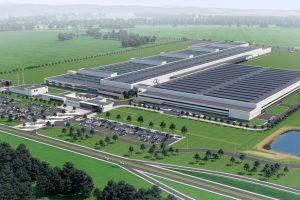 Daimler has announced investments totalling €750m ($836m) in new Mercedes-Benz plants in Poland and Russia that will mean the more efficient supply of both engines and vehicles to market.

Construction has now officially begun on Mercedes-Benz’s first plant in Poland, which will make conventional four-cylinder and hybrid engines. The carmaker is investing €500m in the facility on a 50 hectare site in Jawor.

“With the new site in Jawor, we are ensuring the efficient supply of our vehicle plants with highly efficient engines,” said Markus Schäfer, member of the Divisional Board of Mercedes-Benz Cars, Manufacturing and Supply Chain. He said the company was aligning its global production network to cope with high global demand and to prepare the production network for electric mobility in the long term.

Jawor will become part of Mercedes-Benz Cars’ international powertrain production network, which is managed from the lead plant in Untertürkheim, Germany. The carmaker said it would be installing responsive production systems to enable flexible production, making it possible to produce different engine variants on the same line. It will also apply digitalisation in the form of apps for personnel and energy management.

The plant will be headed by Dr Andreas Schenkel, the first CEO of Mercedes-Benz Manufacturing Poland.

The carmaker is also investing a further €560m to expand its plant in Kecskemét, Hungary to build a new generation of compact cars by 2018.

In Russia meanwhile, Daimler is investing €250m in a car assembly plant in the Moscow region, which will begin production in 2019 with the E-Class sedan. Mercedes will add the SUV models GLE, GLC and GLS to the production line at a later stage.

The plant will be part of the Esipovo industrial park and will cover all production steps from bodyshop to final assembly on a footprint of around 85 hectares. Production will be managed by the newly founded company Mercedes-Benz Manufacturing RUS (MBMR), headed by site manager, Axel Bense.

The company said that the Moscow region had good logistics connections and a plentiful supply of highly qualified workers.

As with the engine plant in Poland the carmaker said it was applying Industry 4.0 level IT technologies. The plant will be connected with all Mercedes-Benz sites around the world which means that every single system and robot can be controlled and reprogrammed remotely.

The commitment of such a large investor and the planned passenger car production are a sign of confidence in the stability of the Russian market and the political direction the Russian government has set for the automotive industry,” said Denis Manturov, minister of industry and trade of the Russian Federation.