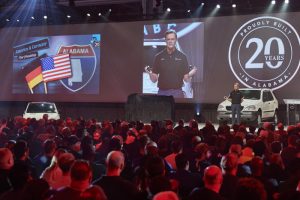 Mercedes-Benz has announced that most of the $1 billion it plans to invest in the US to expand its industrial footprint is slated for the future production of electric vehicles, alongside an expansion of its logistics activities in the country.

The company plans to produce SUV models under its electric vehicle brand, EQ, at its Tuscaloosa, Alabama, facility in future.

In addition, a battery plant will also be built near the existing passenger-car plant.

A new Global Logistics Center and after-sales North American hub will also be built in Bibb County, five miles from the Tuscaloosa plant.

The Global Logistics Center will support worldwide logistics operations connected with products made in Tuscaloosa and will supply overseas assembly plants with car-kits. Operations including brand new IT systems to support lean logistics processes in the new warehouse are scheduled to begin in 2019, according to the company.

The aftersales hub involves the consolidation of the three existing aftersales warehouses at a new location. The new aftersales North American hub will be co-located with the new logistics centre, providing markets abroad with spare parts. The hub is scheduled to start operations at the end of 2020.

Final details are still being worked on in partnership with the State of Alabama, according to the company.

This year, parent company Daimler has announced a number of investments in electric car production, with Tuscaloosa being the fifth investment it has made in battery production.

Construction work on the new 305,000 sq.m facility in Tuscaloosa is expected to begin in 2018, with operations planned to start at the beginning of the next decade.

In May, it held the groundbreaking ceremony for a new €500m ($559m) battery factory in Kamenz, Germany.

Then, in July, Daimler and its Chinese partner, BAIC, agreed to invest 5 billion yuan ($735m) in their local production joint venture, Beijing Benz Automotive Company (BBAC), ahead of electric vehicle production from 2020.

In Germany, the company has already allocated future production of the EQ electric vehicle range to all three of its passenger car plants.

“With production locations for EVs and batteries in Europe, China and, now, the US, our global network is ready for the era of electric vehicles,” said Markus Schäfer (pictured), member of the divisional board of Mercedes-Benz Cars responsible for production and supply chain, speaking at the plant’s twenty-year production anniversary.

“Thanks to our plant modernisation in Tuscaloosa, we will be able to quickly ramp up US production of EQ models.”

Tuscaloosa is home to Mercedes-Benz’s SUV production for the world market, having started production of the former M-Class (today the GLE) in 1997. The company exports more than 70% of its SUVs to markets around the world. The plant produced 310,000 vehicles in 2016.

Following an investment announcement of $1.3 billion in 2015, the plant is already being expanded to prepare for the production of the next SUV generation, including plug-in hybrid models.

That expansion comprises a new body shop, major enhancements to the SUV assembly shop, and upgraded logistics and IT systems.