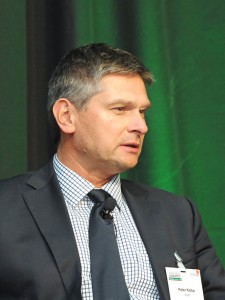 When Audi starts series production later this year of the Q5 SUV crossover at its new plant in San José Chiapa, in the state of Puebla, Mexico, it will begin one of the most complex operations for parts handling and logistics in the country, with tremendous variety and customisation in production. Audi will also use supply concepts that will be new to the country, including long distance just-in-sequence delivery, or ‘pearl chain’, according to Peter Koltai (pictured), director of production control and logistics for Audi Mexico.

However, as well as bringing German and European standards and approaches to Mexico, the carmaker has been changing and redesigning networks to meet North American and Mexican requirements. Such projects have included a new integration of suppliers between Volkswagen Group plants in the region, as well as the development of new kinds of packaging and container tracking, said Koltai, who presented these developments at the 2016 Automotive Logistics Mexico conference.

The $1.3 billion, 150,000-unit capacity plant will be the first full, standalone Audi production site outside of Europe. Audi will also be the only German premium brand to build vehicles in Mexico, but not for long: Mercedes-Benz, which is building a joint venture plant with Nissan in Aguascalientes scheduled to open in 2018, and by BMW in San Luis Potosi for 2019.

Building networks from nothing

Koltai explained that among the reasons Audi chose to build the plant in San José Chiapa was thanks to the state of Puebla’s relatively developed good infrastructure, strong labour force and supplier base. The region also has historic links to Volkswagen, which opened its assembly plant in Puebla during the 1960s. However, the specific area around the plant is very undeveloped. “There is really nothing,” said Koltai. “It is far from everything.”

The state thus offered Audi a number of incentives and support measures in choosing the location, including installing a training centre, building new roads and highway links, and a new railway connection. There are even plans to develop a new city in the wider region.

Even with the right local infrastructure developing, Audi’s supply chain for the plant will be challenging, particularly for its long-distance inbound supply chain, as Audi is not able to yet localise many parts and technologies. Around 35% of Audi’s inbound material flow will come from Europe, while most of the rest will come from North America.

Audi has had to adapt its production system to these realities. For example, the European supply chain will have lead times of around 11 weeks; this is particularly challenging because Audi only fixes its production plan for eight weeks, said Koltai. Thus, Audi has to call the material from suppliers before fixing the plan, putting the pipeline at risk of changes. Flexibility and tracking will be important, as will continuing to develop the local supplier base.

“Our target is to have a much higher localisation rate in the North America region,” Koltai said.

Given the long distances in North America itself, the inbound network has also required careful planning at a group level. The company has applied a similar concept in the region to the group’s European network, which includes consolidating suppliers across regional plants and moving them through crossdocks to factories. The network now includes four group factories in the US and Canada, including Volkswagen’s assembly plant in Chattanooga, Tennessee, its large assembly plant in Puebla and its engine plant in Silao.

“This allows for more synergies across our supply base,” Koltai said.

Despite the long-lead times for European supply and long distances for much regional content, Audi will still use a proportion of ‘pearl chain’ deliveries, requiring sequences to be fixed and synchronised with production far in advance. Koltai said there aren’t other OEMs doing ‘pearl chain’ manufacturing in Mexico. Audi first introduced a wider use of this process at its plant in Neckarsulm, Germany.

“When we started to explain to colleagues and providers here in Mexico that we were going to do it here, they thought we were crazy,” he said.

Designing for the best of both worlds

Audi has carefully designed in-plant logistics flows around the variety of parts, packaging and handling it will require. Overseas material will arrive through the container yard, while North American material will arrive through a separate trailer yard. The logistics warehouse will be close in proximity to the assembly hall, and empty containers will be sent directly back to the supplier through the warehouse. A supplier park, located on the plant grounds just beyond space allotted for expansion, will also supply material just in sequence to the assembly line.

Koltai pointed to a number of adjustments that Audi has had to make for its inbound and in-plant logistics processes in Mexico and the North American market. In Europe, for example, almost all trucks have curtains that open to allow for side unloading, while in Mexico it is 100% rear unloading. Meanwhile, to deal with the high amount of dust and sand in the area, Audi has worked with suppliers to develop inflatable doors to cover the space between the truck and the loading dock to avoid sand getting in the building and onto the parts.

Packaging is also an area in which Audi has invested considerably to adapt to the market. For example, because of the larger trailers in North America, Audi has designed a special version of its ‘universal load carrier’ container for Mexico that has a European base (1,200mm by 1,000mm) and this able to carry imported packages, but with a height of 910mm to match the local trucking height. “This way, we are able to get the best of both worlds,” Koltai said.

In this and other packaging equipment, Audi has also made ergonomic adjustments to reflect that Mexicans are on average 10cm shorter than Europeans.

Koltai also revealed that the Volkswagen Group has had problems at its North American plants with lost returnable packaging. In response, Audi is equipping all returnable containers for the plant with RFID tags. This will help Audi to effectively track and trace containers, keep up with maintenance, prevent loss of equipment, as well as to manage inventory better, Koltai said.

"As lessons learned from the last few ramp-ups worldwide, we have decided to keep the internal [plant] logistics, at least in the first place, in-house with our own staff" - Peter Koltai, Audi Mexico

In terms of in-plant logistics handling, Audi has decided, unlike BMW in San Luis Potosi, to keep most of this activity in-house with its own staff. “As lessons learned from the last few ramp-ups worldwide, we have decided to keep the internal logistics, at least in the first place, in-house with our own staff,” he said.

“We have, however, given a part of our services and material handling to a logistics provider and after the ramp up, we will look over this concept and see if we have the same level of qualification and the same level of services as in Europe, and then make a new decision.”

As San José Chiapa will be the mother plant for the Q5, it will ship a large share of production beyond North America. According to Audi’s current outlook, around 47% of vehicles will be destined for Europe, 38% for North America, 8% for Asia, with the rest going to South America, Australia and Africa.

This is considerably more than the average ration of exports beyond North America for OEMs in Mexico, which is currently fewer than 20% of exports, on average. BMW expect to ship around one-third outside North America.

Audi will combine these shipments together with output from Volkswagen’s Puebla plant, and will thus have a common network with much of the carmaker’s current distribution from Mexico. Rail will play an important role, as 86% of vehicles are expected to leave the plant by train.

Beyond that, however, exports will move in a mixed model of rail and sea. Vehicles will move by rail and truck to the port of Veracruz on the east coast, where they will be shipped to the North American east coast, South America, Europe, Africa, the Middle East, and Turkey; vehicles will move by rail to the port of Lázaro Cárdenas on the Pacific coast, where units will be shipped to Asia. A large share will also move northbound on pure rail flows, moving to Houston, Texas via the border crossing at Laredo, and by rail to San Diego, California via the El Paso crossing.

Like many other OEMs in Mexico, Audi’s logistics executives share concerns about logistics and infrastructure capacity in Mexico, particularly at Veracruz. Koltai cited limited parking space and berth availability, as well as a wider lack of capacity for rail wagons and trucks. “We can see that the prices are already going up in this area,” he said.

There are further issues with telecommunications connectivity for mobile phones and IT, although he said this was somewhat stronger in San José Chiapa than elsewhere.

“It has to be improved, as does the electricity supply in the industrial areas,” he said.

Nevertheless, with serial production set to start in the second half of this year, Koltai is confident in the plant’s success. Building the Q5 in Mexico will cut delivery times for North American customers, while it should also limit the company’s impact from currency fluctuations.

“We are very glad to be here in Mexico,” he said.

A video recording of Peter Koktai’s presentation, along with the rest of the conference, is available here.

By Christopher Ludwig and Rachael Hogg.