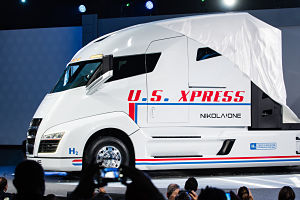 Salt Lake City, Utah-based Nikola Motor Company has unveiled its first hydrogen-electric truck, the Nikola One. Based on high-density lithium batteries, it is said to provide a 1,200-mile (1,920km) range and over 1,000hp of power.

The company has also announced an agreement with Ryder to use its 800-plus locations in the US, Canada and parts of Mexico to service, sell and warranty the vehicles.

Byrdstown, Tennessee-based vehicle manufacturer Fitzgerald, which currently builds 6,000-9,000 trucks a year, will produce the first 5,000 units for it, with full production at Nikola’s own facility commencing in 2020.

“Over that period of time, in the next four to five years, we will be building our own manufacturing plant. Over $1 billion will be invested in this facility,” said Milton at the recent launch.

The plant’s location will be revealed in the middle of next year but the firm has already been talking to “multiple states” about it, he said.

The company also plans to build 364 hydrogen refuelling stations across the US and Canada, with the first ones opening in 2019.

In addition to the sleeper-cabbed Nikola One, the OEM is already developing the day-cabbed Nikola Two. At the end of next year, it also plans to launch the Nikola Zero, an electric utility task vehicle (UTV) with a lithium-ion battery. It will also offer battery packs to OEMs for purchase from next year.

US Xpress, the country’s second largest privately-owned truckload carrier, was among those involved in the development of the Nikola One.

“Any time there are new technologies in the market that we think will be a game changer, we tend to try to participate with those manufacturers and come into the market with them,” said US Express CEO and chairman, Max Fuller. “We try to help them understand what is needed in our industry, because a lot of people will build a product and miss the mark.”