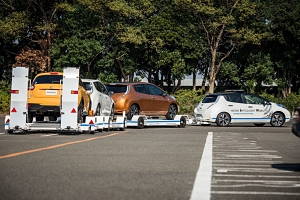 Nissan has introduced an intelligent vehicle towing (IVT) system at its Oppama manufacturing plant in Japan that uses a modified, self-driving Leaf electric vehicle to pull a car-carrying trailer.

Trials of the system began a year ago and over 1,600 test runs have been carried out since, the OEM has revealed.

The new system is used to move finished vehicles from the end of the production line to a dedicated wharf, where they are loaded onto ships – a journey traditionally taken care of by a team of human drivers.

Unlike conventional automated guided vehicle systems, which are fixed-path and typically involve the installation of embedded wires or surface-mounted magnetic tape to denote a route, this system does not need any special infrastructure to operate.

The towing car is equipped with an array of cameras and laser scanners that detect lane markings, curbs and potential obstacles or hazards. By cross-referencing this information with map data, the towing vehicle calculates its own position and negotiates the route to its destination.

All the driverless towing cars are connected to a central traffic control system, which can monitor the location, driving speed, remaining battery power and operational status of each one. A fail-safe navigation system has been developed to counter potential risks and unexpected conditions including adverse weather and low light conditions.

“Introducing IVT will allow Nissan to improve production efficiency,” said the OEM in a statement.

The company added that it would continue to test the system at its Oppama plant and examine the possibility of implementation at other manufacturing facilities both inside and outside Japan.