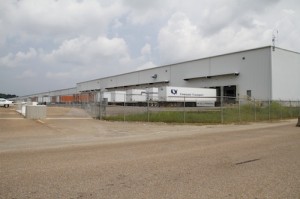 The existing centre just completed will create immediate space for suppliers.  A spokesperson for Nissan said that 8-12 suppliers are expected to operate out of the facility with a number of suppliers already committed to moving there.

The new supplier park, next to the vehicle assembly plant, is currently under construction. It is expected to support 400 new supplier jobs and a further 400 Nissan jobs, a move welcomed by state authorities on account of the current high unemployment rates in Mississippi. Phil Bryant, Mississippi governor, announced that he was ‘”grateful to Nissan for demonstrating to the world that ‘Mississippi works’”.

The integrated logistics centre under construction will cover more than 93,000 sq.m and support the inbound feed of production parts as well as  handling outbound returnable containers amongst other services. The finished project will increase Nissan’s growth and volume of production by providing essential space to support the on-site suppliers, while further supporting Nissan’s overall strategy to bring more production to the US.

The centre is expected to be operational this autumn, with full completion in early 2015.

Nissan is increasing its production of core models in Altima, Pathinder, Sentra, Rogue and Versa in North America. These are in addition to other key models such as the Leaf electric vehicle and the all-new Murano, Maxima and Titan coming in the near future.

It aims to up the percentage of vehicles it builds in North America in relation to all those it sells in the US from the 69% of a few years ago, to 85% by 2015.

Nissan’s spokesperson said that there were several advantages in moving more production to the US market including improved responsiveness to demand, the cost advantages relating to import and export tariffs, leverage on local supplier networks and the prevention of disruptions in the supply chain.