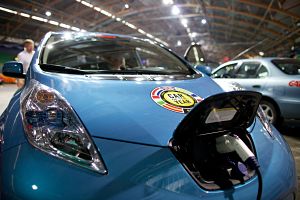 Sonny Wu, chairman of GSR Capital, said: “The acquisition of AESC represents an important step for us in the new energy vehicle industry chain.

“We plan to further invest in R&D, expand existing production capacity in the US, UK and Japan, and also establish new facilities in China and Europe, enabling us to better serve customers around the world.”

In completing the deal, Nissan will first take full control of AESC by acquiring the 49% interest held by Japan’s NEC Corporation.

AESC was established as a joint venture company in April 2007. AESC's lithium ion batteries use electrodes produced by NEC subsidiary, NEC Energy Devices. Among their applications, these batteries are used in Nissan's Leaf electric vehicle (pictured) as well as in the e-nv200 electric van built in the carmaker's Barcelona plant.

Hiroto Saikawa, president and CEO of Nissan, said: “This is a win-win for AESC and Nissan. It enables AESC to utilise GSR’s wide networks and proactive investment to expand its customer base and further increase its competitiveness.

“AESC will remain a very important partner for Nissan as we deepen our focus on designing and producing market-leading electric vehicles.”

NEC is currently also negotiating the transfer of all its shares in NEC Energy Devices to GSR.

Nissan says the workforce at all the facilities covered by the deal, including the production plants at Zama, Sunderland and Smyrna, will be unaffected. The headquarters and development centres will remain in Japan.