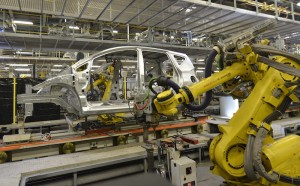 Nissan has begun production of the new Note model at its Sunderland plant in the UK.

The compact MPV is set to further boost revenues in Sunderland following an investment of £125m ($200m) by Nissan. These funds were secured with a £9.3m grant from the UK Government’s Regional Growth Fund. The new version of the Note will be made alongside the Qashqai and Juke, as well as the new Leaf electric vehicle, which went into production there in April this year.

In addition to vehicle assembly, the new Note has brought additional work to the Sunderland plant and its supply chain in axle production, cylinder head casting, camshaft machining and engine assembly.

John Martin, Nissan Europe’s senior vice president for manufacturing, purchasing and supply chain management, said that the Note’s combination of “design, technology and safety features” made it an exciting and innovative brand. “This investment is further endorsement of our Sunderland plant, which is now an international benchmark for productivity and quality,” he said.

Michael Fallon, the UK’s Minister of State for business and enterprise, added that the move came as a result of government and industry working together. He said that production of the new vehicle would bring a welcome boost to the workforce and to the greater UK’s North East economy as a whole.

“Working in partnership with industry, our automotive industrial strategy sets out how we will secure the long term future of the sector as a UK success story, by growing our share of the value chain and by getting ahead of the game in research and development on the vehicles of tomorrow.”

It is estimated that the Note will result in the creation of 2,000 new jobs in the automotive industry in the UK, which includes 400 at Sunderland. This means that there are currently 35,000 people employed in Nissan’s British workforce. Nissan has remained Britain’s biggest car producer and has been since 1998.

Over £3.5 billion was originally poured into the Sunderland plant in 1986, and which now exports 80% of production to 97 markets. In 2012, the group produced more than 510,000 vehicles. Its newest model will see Nissan’s busiest launch period in Europe since its conception: further proof of its goal to become Europe’s best-selling Asian brand.