NYK announces South American exports from US and Mexico

NYK Line is moving vehicles and equipment into Central and South America with announcements that it has set up a new joint venture in Colombia for imports from Mexico and also will start handling exports from Port Canaveral in Florida, in the US. 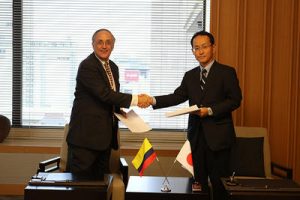 In the first move, NYK has signed an agreement with Colombian transport and storage company Intermodal for the handling of finished vehicle shipments into the country from in Mexico. Intermodal is a division of the Navemar Group, NYK’s agency in Colombia, and a provider of inland transport and container storage.

The agreement involves the set up of a joint venture company – NYK Auto Logistics Colombia S.A.S (NYKCOL) – to operate a vehicle logistics terminal at the port of Cartenega in northern Colombia. NYKCOL will work with finished vehicle terminal operator Puerto Bahia. According to NYK the agreement with Intermodal will lead to NYKCOL expanding its services to include inland transport, storage and pre-delivery inspection (PDI) in response to expanding demand.

According to data from Trading Economics, passenger car registrations in Colombia increased to 24,243 in July this year, up from 21,835 for the previous month.

In October NYK will also start to ship vehicles and heavy equipment from Port Canaveral in Florida to Central and South America. The company’s vessel M/V Neptune will make the first call on October 10th , the first in a monthly service.

“With the relatively short trucking distance between Port Canaveral and the numerous auto and heavy equipment auctions located in Central Florida, the NYK service will provide area businesses with cost-effective options and positions us competitively with other Florida seaports,” said Alberto Cabrera, Port Canaveral’s senior director of cargo business development.