Toyota claims 100% use of renewable electricity in Europe 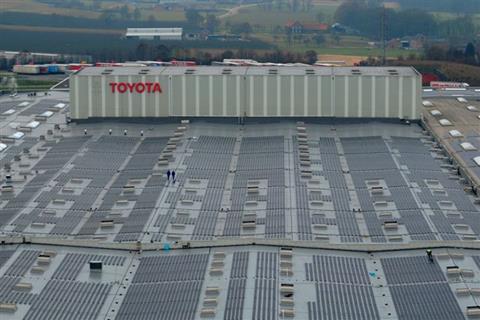 The goal was achieved after several years of effort. The OEM added solar panels to the roof of its PDC in Diest (Belgium) in 2010 to meet between 15% and 20% of site’s annual electricity requirements and reduce its energy bill.

A year later, solar panels were included at the design stage of the new PDC at Illescas (Spain) to improve energy efficiency and reduce the operation’s carbon footprint.

In the same year, the company’s VLC in Zeebrugge (Belgium) allowed construction of two wind turbines at its site to contribute up to 17.1 GWh annually to public supply.

Also in 2011, TME installed a solar wall at its car assembly plant in Valenciennes (France). The panels absorb heat when sunlight strikes them, allowing warm air to heat the building’s interior. It was the first such installation at an industrial site in France.

In the following years, the company added solar panels beside its British plants to generate enough solar power to build 7,000 vehicles at Burnaston and more than 22,500 engines at Deeside.

“Having sustainable operations in Europe is very important if we want citizens and consumers to continue supporting Toyota,” said Dr Johan van Zyl, president and CEO of TME . “Thanks to the market success of our hybrid electric vehicles, we are well on track to meet our European CO2 emissions targets for new vehicles – but when it comes to the environment, we take a 360-degree approach and aim to go beyond just vehicle emissions.”

That includes operating commercial delivery trucks that run on fuel cell technology and using rail services for parts shipments in Japan. The Toyota Long Pass Express, which is run in conjunction with Japan Freight Railway, carries parts from Nagoya to its compact car assembly plant in Iwate Prefecture. It also has a cross-industry joint freight operation with Sagawa Express, in which logistics provider SG Holdings ships home delivery packages from central Japan to the northeast on Toyota’s service for automotive parts deliveries.

The majority of TME’s electricity usage is on the production lines, with the PDCs’ and VLCs’ consumption dominated by services such as lighting and computers, a company spokeswoman told Automotive Logistics.