Audi officially premiered its e-tron electric SUV at a summit event in San Francisco this week but production has been underway for a couple of weeks already at its plant in Brussels, Belgium, which is making the e-tron for global markets. 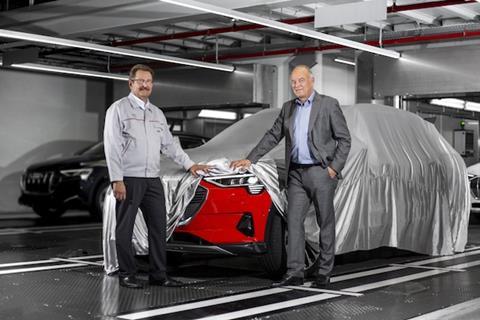 Patrick Danau (left), managing director of Audi Brussels, with Peter Kössler, board of management member for production and logistics

The German carmaker confirmed it was employing autonomous technology for the delivery of parts and batteries to the assembly line from onsite facilities. It is also sequencing battery assembly and fitment at Brussels.

“Audi built up numerous competencies in-house for the Audi e-tron and developed both the battery technology and the actual drive system itself. And employees rethought, planned and implemented many stages of production,” said Patrick Danau, MD of Audi Brussels.

According to the carmaker, since the summer of 2016, the plant has extensively rebuilt its body shop, paint shop and assembly line, and has set up its own battery assembly unit in a former logistics unit next to it.

The e-tron’s lithium-ion battery should provide a range of more than 400km and can be charged in 30 minutes at high-power charging stations offering 150kW.

Driverless transport system
Audi said production at the Brussels plant adhered to the principle of digital networking, with a case in point being the tailor-made system of driverless transport system (DTS) it is using to move parts and batteries to the line. The carmaker is operating two types, known as FTF and FTS, which differ in size and application. The carmaker confirmed that Serva Transport Systems was supplying the systems. Audi already uses Serva machines at Ingolstadt for vehicle management and the carmaker won a logistics award for the application of the technology at Ingolstadt from the German Association of the Automotive Industry (VDA) last year.

A spokesperson for Audi said that every day, 27 of the electrically powered vehicles navigated routes through the factory halls delivering components, such as the front and rear axles, and the electric motor. The DTS also moves the batteries powering the e-tron between the sequencing store and the section of the assembly line where the battery is installed.

With the help of specific sensor technologies, the DTS reacts and communicates with employees in the different parts of the facility and when the units require recharging they automatically drive to an induction charging station.

“Everything in production has been optimised to achieve completely smooth processes”, said Bertram Günter, project leader of the new system at Audi Brussels.

Audi said the use of such smart factory technology made the increasing complexity and broad spectrum of variants in vehicle production manageable.

“The aim is to streamline the Audi production network, making it more flexible and efficient in order to secure for all of our sites a lasting competitive edge,” said the spokesperson, adding that the company was completely rethinking processes and structures for the smart factory.

The DTS is also used on a new cable sequencing concept that Audi has developed for e-tron production.

Each vehicle requires an individual mix of cables and Audi has come up with a system it calls the IRK Project to manage storage and delivery of the cable sets. The company has created a specific storage area and invented specialised containers into which the cable sets are placed before being put on a conveyor, scanned and cross checked. The data gathered is entered into a central system. This way, employees are able to track every box and the components inside through the delivery to lineside by the DTS. Audi said using DTS here also allowed it to deliver components from the warehouse to the assembly line on demand.

Battery logistics
The start of production of the e-tron marks Audi’s entry into in-house battery assembly. The Brussels plant is working with Audi’s High Voltage Competence Centre near Ingolstadt to deliver the battery system, which includes packaging, cooling, fusing and – in collaboration with bodywork developers – integrating it into the vehicle.

The Brussels plant will not focus on the development of battery technology, but will prepare batteries for fitment into vehicle bodies in a fully automated process. Audi said in planning production of the e-tron, it wanted everything as close to the assembly line as possible and transformed a former logistics shop into a battery assembly station.

The complete battery system weighs 700kg, including its housing, which acts as a load-bearing and stiffening part of the vehicle platform and has advantages for vehicle handling and acoustics within the vehicle, according to the carmaker.

“The best ideas are only as good as their ability to be industrialised on a mass-produced scale”, said Bertram Günter, project leader of Audi e-tron production. “The experience garnered from decades of vehicle manufacturing is a huge help. The battery strategy is about teamwork: major parts of the battery housing come from Györ and Neckarsulm. The experience from the high-voltage battery project house in Gaimershaim is obviously part of the mix.”

“One of the things that is completely new in the Audi e-tron is that the battery is fully integrated into the load-bearing structure of the vehicle’s floor,” said Jan Maris, production manager at Audi Brussels. “This means taking a lot of safety precautions during construction and exercising a level of precision in battery assembly which is itself setting new standards.”

The company is planning to recycle used batteries by converting them into stationary energy stores and the concept is being trialled near Ingolstadt. The company said a container for four traction batteries of varying sizes worked in conjunction with a photovoltaic system that could generate up to 20kW of power on sunny days. A second container houses the connection and control equipment, which controls the conversion of direct current from the batteries into alternating current at a constant 400 volts. Once the batteries have dropped to 10% capacity, they are recycled.

The autonomous movement of the batteries to the production line is part of an overall focus on safety and security. Every production step is performed by a robot protected by high security cabins. Direct human interaction is prohibited except in the case of system errors, when only specifically trained employees are allowed to step in. Those staff have collectively been through around 200,000 hours of specific training, according to the company.