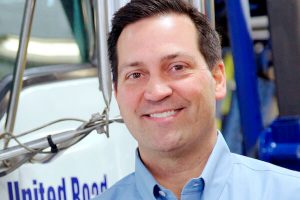 Marc Anderson (pictured) is taking over as CEO of US finished vehicle haulier, United Road Services. He replaces Kathleen McCann, who will move to the role of executive chairman in January.

Anderson, who joined the company as chief operating officer in 2014 from Inland Industrial Services, added the role of president to his responsibilities in 2016.

“United Road’s mission is to be the supplier and employer of choice in finished vehicle logistics,” said McCann. “Mark has proven himself an able leader. In the past five years, he has successfully led several key initiatives which have expanded our service network, introduced efficiencies in our operations and secured new business. He has earned the trust of our customers and our people. United Road will be in great hands with Mark in the driver’s seat.”

McCann joined United Road in 2011, having previously worked at Soave Enterprises as senior vice-president. Under her direction, the company has doubled in size and expanded its carrier network. This year, it is expected to move more than 3.5m new and remarketed vehicles through the US and Canada. The company was bought by the Carlyle Group last year.

McCann will now focus on the strategic direction of the company. “My role as executive chairman will be to drive United Road’s strategic vision and support Mark and his very capable team achieve even more success in the future,” she said.

The company is currently looking for a successor to Anderson as COO.