Legacy of a moderniser: Sergio Marchionne 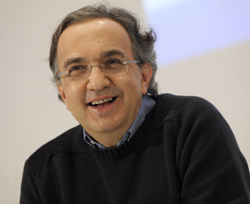 Already known for turning around the Fiat Group in under two years, Sergio Marchionne was instrumental in Fiat forming an alliance with US carmaker Chrysler when it emerged from Chapter 11 bankruptcy in 2009. The Italian carmaker took a 20% controlling stake in Chrysler in June that year and Marchionne set to work by slashing costs, reducing the number of vehicle platforms and refocusing on SUVs. The result was that Chrysler returned to profitability two years later and Fiat took a 53.5% stake in it (the companies officially merged in August 2014).

From 2010, FCA went on to several years of consecutive sales growth in the US as the market recovered from the economic crash of 2008, doubling exports to global markets. That success was built on, among other things, a better organisation of its logistics and a drive toward greater supply chain efficiency between the two companies.

As he did at Fiat, Marchionne gave supply chain management a higher priority at Chrysler, based on the aim of greater global integration between the brands including component sharing across global platforms. According to this the initiative, Fiat group vehicle platforms, including Alfa Romeo’s rear-wheel drive Giorgio, will be used across FCA including for Maserati, Jeep and Dodge vehicles.

Marchionne drove part cost reduction through collaboration between dedicated teams at each of the carmakers and savings through supply base optimisation underpinned the turnaround at both Fiat and Chrysler. With regard to FCA, it was achieved through a more aligned Fiat-Chrysler purchasing organisation, useful for Chrysler at the time given that one of its main objectives in emerging from bankruptcy was to reduce cost across the board and improve its order-to-delivery cycle time. That joint purchasing approach and the effort to drive down material costs was supported by a dedicated purchasing and engineering team that Marchionne put in place.

The merged companies developed shared strategies for all major commodities and the major suppliers of them. Moreover, under Marchionne, FCA strove to improve supplier relationships through streamlined internal processes and introduced regional sourcing offices to benefit from the strengths of each carmaker globally.

The year following Fiat’s first stake in Chrysler, Marchionne changed vehicle logistics and parts distribution in Europe for the US carmaker as part of a wider sales and service integration between the two companies. On the finished vehicle side, Chrysler was responsible for distributing Fiat’s vehicles in North America, while Fiat distributed Chrysler vehicles in Europe. That organisation enabled each company to take full advantage of each other’s geographical expertise, sales and service networks. Chrysler was incorporated into Fiat’s outbound distribution network in Europe, giving it access to key markets outside the US.

Pushing forward digital transformationUnder Marchionne, FCA became the first carmaker to require carriers to switch to paperless deliveries and damage reporting for final dealer handovers in the US and Canada, an initiative it began in 2014. It followed that in 2016 with the roll out of electronic proof of delivery (ePOD) to dealers, and used the technology for the release of vehicles from rail ramps to road carriers.

At the same time, the company updated systems to improve visibility and network optimisation. In 2015, it contracted logistics management and IT provider ICL to manage its outbound vehicle operations across North America using ICL’s VIN Track system. FCA had better visibility over the transport of Chrysler, Jeep, Ram, Dodge, Fiat and Alpha Romeo and other customers in the US, Mexico and Canada. Vehicles were tracked from assembly lines to dealers and through the ports of export from North America. In its first full year of operations it had ETA and performance monitoring on 3.2m vehicles.

Under Marchionne’s direction, FCA last year ploughed$1 billion into its Michigan and Ohio plants to extend its Jeep product line-up in response to a continuing shift by consumers to SUVs and pickup trucks. That investment was part of a bigger reshaping of FCA’s production and supply chain footprint in North America and a move to end production there of sedans and smaller vehicles. It also had an impact on supply and logistics volumes to and from the plants.

In addition, the move to increase US production capacity gave FCA the scope to export the Jeep to international markets. Marchionne switched production locations in the face of political decisions made by the Trump Administration, stating that the company would “adjust whenever the rules get changed”. FCA realigned supply by announcing an investment of $1 billion in its Michigan and Ohio plants. The investment in new production, tooling and expanded locations is set to have a big impact on supply and logistics volumes to and from the plants. Shipments of finished vehicles globally are also expected to increase following the upgrades.

The $1 billion has been put toward retooling and modernising the Warren Truck Assembly Plant in Michigan to produce the all-new Jeep Wagoneer and Grand Wagoneer, and to the south plant of the Toledo Assembly Complex in Ohio, which will build a new Jeep pickup truck. FCA has also committed to invest nearly $1.5 billion in its Sterling Heights Assembly Plant (Michigan) to retool it to build the next-generation Ram 1500. That investment and the commitment to more cost-effective supply chain management continues as Marchionne’s legacy.