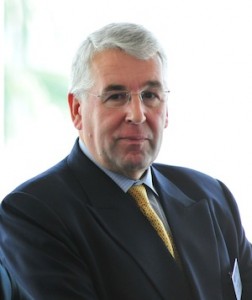 Peter Ward is moving on from his role as commercial director and head of cargo supply chain at DP World London Gateway, to take over as CEO of the United Kingdom Warehousing Association (UKWA). His move to UKWA follows the announcement that Roger Williams will be leaving the role in mid January.

DP World London Gateway is the UK’s new deep-water container terminal and Europe’s largest logistics park. A replacement for Ward has yet to be announced.

Ward has over 30 years’ experience in international transport and logistics, and is recognised as a principal authority in global supply chain management according to UKWA. He is a graduate of the Institute of Export and a member of the Chartered Institute of Logistics and Transport. Ward began his career in the export shipping department of Courtaulds. More recently he was director of Europe at P&O Nedlloyd Logistics, and managing director of the International Supply Chain division at Wincanton Group. He joined DP World London Gateway as commercial director and head of cargo supply chain in 2011.

“We are delighted to announce the arrival of Peter Ward as CEO designate of UKWA,” said Tony Mohan, UKWA’s chairman. “He is a man of considerable logistics experience gained in a variety of disciplines, and will greatly enhance the UKWA team. He joins UKWA during a period of fundamental change, and we look forward to the benefit of his extensive capabilities.”