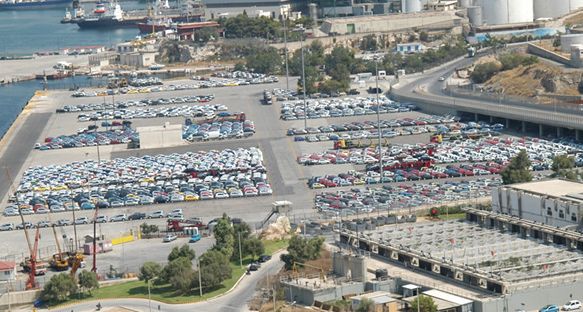 Piraeus Port Authority (PPA) has defended its recent decision to increase vehicle handling charges, pointing out that it had not previously done so for a decade and that the rise would not apply to 75% of traffic passing through the Greek port.

A spokesperson for the port authority confirmed to Automotive Logistics this week that the rate charged for a vehicle under three tonnes being either imported or exported would increase from €33.92 ($41.8) to €40.70 ($50.2), and that a new ISPS charge (covering safety and security) of €4.80 per vehicle would also apply. Together, these represent an increase of over 34% on the previous rate.

Although logistics companies using the port have expressed some frustration at the move, the PPA pointed out that it was the first time in a decade that handling charges had been changed, despite its own costs rising significantly since 2008 – including costs brought about by collective labour agreements and higher concession fees.

The PPA spokesperson also stressed that transhipment charges for vehicles staying temporarily at Piraeus had remained unchanged since 2012 – and that as transhipments accounted for the majority of movements through Piraeus’ car terminal, the new charges would effectively apply to only 25% of the traffic passing through the port.

The spokesperson went on to reject the suggestion that the increases were being applied to help it invest in planned growth at the port, stating: “We have to underline that the increase in vehicle handling fees is not designed to generate revenue for the PPA investment ‘master plan’ but is directly connected with the efforts of the management to cover operational expenses.”

The master plan consists of a €500m ($620m) investment running to 2021 to increase vehicle handling at the car terminal through the expansion of existing infrastructure and the upgrade of services, as well as the development of the container and cruise terminals.

The PPA also said that the new rates would not begin until March 16th, rather than the beginning of February as originally planned, and that they would stay in place for three years, providing “a stable environment for [our] clients to negotiate their business deals”. The decision to delay implementation of the increase followed consultation with stakeholders, said the spokesperson.

Despite those reassurances, short-sea ro-ro operators moving vehicle volumes through the port remain dismayed. Adding to comments made by Grimaldi last week, UECC added its voice to the concerns of the operators.

"The Piraeus case is very worrying and UECC has already protested this strongly to the Piraeus Port Authorities," UECC's head of procurement, Rolf Bredal, told Automotive Logistics this week. "The fact is, however, even more concerning than to look at Piraeus as an isolated case, as many ports are doing exactly the same and many terminals and many stevedores likewise."

Bredal went on to say that UECC respected the rights of the unions and port authorities but added that suppliers needed to adjust to the "real-life situation in the industry" and be more flexible and efficient in their own operations.

More flexibility and efficiency could be achieved in a number of ways by port operators said Bredal, including being more flexible in organising stevedore shifts and being more open to legislative changes in terms of allowing for pilot exemption. "Last but not the least; open up for competition in the different port services," said Bredal.

According to UECC there is a monopoly situation developing in the European short-sea shipping industry, which means carriers are unable to buy services in a free market.

Piraeus port was privatised following the debt crisis that hit Greece in 2009 and now leases operations, mainly at the container terminals, to Cosco Shipping.

Read more about UECC's concerns about the sector along with the latest developments at all the main vehicle handling ports in Europe in our European ports survey, being published in the April-June edition of Finished Vehicle Logistics