A new bill before the US House of Representatives aims to put stricter controls on Class 1 railroads in the face of disruption and delays to freight movements. However, the proposals have met with criticism from the Association of American Railroads (AAR). 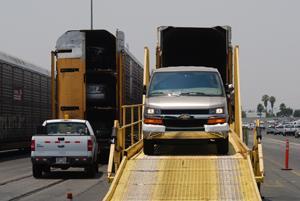 In the US, 75% of finished vehicles are shipped via the rail network. That puts gigantic pressure on a network not always capable of handling the volume. At present, US rail freight is delayed by staff shortages and, with a reducing number of individual players in the North American rail freight field, there is governmental concern over the market being monopolised.

In response, this month a US governmental subcommittee introduced has introduced legislation to “create a fair marketplace” for Class 1 freight railroads and the companies using them. The Freight Rail Shipping Fair Market Act aims to authorise the Surface Transportation Board (STB), which is responsible for economic regulation of the various modes of transport in the US, with powers to control the railroads.

According to Donald Payne, chair of the Subcommittee on Railroads, Pipelines, and Hazardous Materials, freight rail companies have “focused on profits instead of performance”, which has led to delays and problems in how goods are transported across the country.

“My bill gives the [STB] the power to prohibit rail rate increases during a rail emergency and resolve rail emergencies when they occur,” said Payne. “This bill will improve the speed and reliability of rail service[s] and guarantee that freight rail shipping continues to improve in the future without unnecessary regulations.”

Extended powers
However, the AAR opposes the act. It said the legislation will replace fairer, free market competition with over-regulation. It also said that the mandated studies and concerns proposed in the bill are already actively under investigation by the STB.

The prioritised items in the act give more funding and extended influence to the STB. In particular, there are powers to prevent rate increases during periods of high demand and to force railroads to ensure there is sufficient capacity to meet that demand.

Furthermore, the STB will be given the ability to declare a rail service emergency and thus freeze rail rate increases until the end of the emergency period. The STB will also be able to require railroads have adequate equipment, track and personnel whenever it determines that there are urgent freight rail problems.

Railroads, private car owners and lessees would all have to report how much demurrage they have charged, on a quarterly basis, to the STB. This is part of a plan to even the way that companies, in particular private rail car owners, are able to charge premiums when there is high demand for rail freight services.

Funding for studies
The funding offered by the act is quite small: $256m over five years. Of that, 5% needs to be reserved for passenger rail activities and job creation, while at least $2m, over the first two years needs to be used on funding studies into the environmental benefits of rail freight and passenger services, and into how rail fits into supply chains.

One of those studies will look into competition in the US freight railroad industry and will be carried out by the STB.

The STB is also required to review what is listed as exempt commodities one year after the act is brought in and every ten years thereafter. Exempt commodities would be those considered to have such a competitive market that there was no need for the STB to regulate how they were charged to freight.

A subsequent report is required into the viability, safety and regulatory challenges of implementing a GPS and telemetry system for rail cars, with details of what cargo is where in the network. In principle, the system give shippers the ability to track their own cargo. That report will be prepared in collaboration with the Federal Rail Administration and the Department of Homeland Security.

Two additional studies are directed at the National Academies of Sciences, Engineering and Medicine and in the US. One of them will look into the environmental benefits of rail freight and passenger services, and how the STB can incentivise the industry to improve those environmental benefits further. The other is into supply chain data constraints that could be preventing full, holistic awareness of freight delays and ways to improve the flow of rail freight.

‘Impudent proposal’
The rail act also increases the number of representatives the STB has on the Railroad-Shipper Transportation Advisory Council from three to five, allowing all STB members to vote. An additional Passenger-Freight Rail Transportation Advisory Council will be formed, with 18 members, including the five STB representatives. That body will prepare annual reports and policy recommendations on how passenger and freight rail will work together.

AAR president and CEO, Ian Jeffries, called the act an “impudent proposal” that turned the clock back “more than 40 years” and introduced heavy-handed government mandates. Jefferies pointed to the $760 billion invested in freight railroads since the industry was partially deregulated in 1980, with the Staggers Act.

The STB’s own chairman, Martin Oberman, also said: “While the problems facing the rail industry today are significant, in my view, the board can use its existing authority to mitigate those problems in a meaningful way.