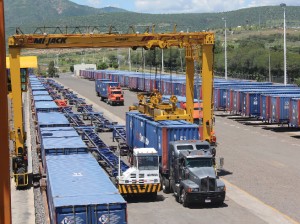 [Updated 28th September] Mexico is set to be the United States’ largest trading partner by 2018. Last year, 20 years after the NAFTA agreement was signed, trade between the two countries hit $592 billion, closing in on the $660 billion in trade between the US and Canada. The automotive industry is a big part of that and is the largest and fastest growing industry in Mexico right now. But to take over Canada as the main trading partner for the US and maintain the pace of growth in the car sector, Mexico needs to address some nagging problems, including border delays, problems with the visibility of freight in transit and challenges to the infrastructure. According to speakers at this week’s Automotive Logistics Global conference in Detroit there are signs that those problems are being addressed, albeit with mixed results.

The average time that freight stands still at the US-Mexican border, across the different manufacturers, is between 21-28 hours. However, poor communication, through lack of visibility, can mean it is stuck there for days. Taking the average delay with an average of 16,000 truck crossings a day equates to $1.5 billion in inventory sitting around according to Scott Grady, senior vice president of automotive solutions at transport and logistics specialist, Landstar System. That situation has been exacerbated recently with an upsurge in scrutiny at the border over freight inspections.

Grady said the situation needed addressing before the bottlenecks stemming the increase in automotive trade over the border became impossible to solve. To do that Grady said it was down to establishing an agreed procedure for improvement with all parties, including Mexican authorities. Toward that he said the Mexican customs service was now more willing to cooperate and that Landstar was testing out a new service next year thanks to the progress made.

Truck remains the dominant mode in and out of Mexico, accounting for 66% of freight moved. Truckload border crossings have increased 26% since 2009 while rail and ocean vie for less than half of that accounting for 14% and 13% respectively according to Grady. At the same time the bridge capacity in four years is not going to be enough to hold the commerce that is going back and forth.

On a more positive note, the development at ports is making progress while a new rail link connecting Brownsville in Texas to Matamoros in the northeastern Mexican state of Tamaulipas opened last month. Called 'The West Rail Bypass International Bridge, it will largely be dedicated to freight. Overall, Mexico is committing $42 billion in transport related investment in infrastructure according to figures presented by Ryder’s director of customer logistics, Frank Bateman.

Shining a light on border crossings
Penske Logistics’s senior account executive, Tim Flucht, outlined an initiative that the company has developed to track and trace cross border movements of inbound parts from suppliers in Mexico to the US.

The company currently handles 900 shipments across the US-Mexico border every day but as Flucht pointed out, that is where visibility is lost and is something of a 'black hole'.

“It is very difficult to maintain visibility and when you do have delays because of the multiple parties involved it is difficult to identify the root cause,” noted Flucht. “That can have a negative impact on plant production or service parts availability.”

Working with one of its OEM customers Penske has established a seven-point network milestone track and trace system to map out specific parts of the journey over 58 hours between departure of material from the OEM’s suppliers in Mexico to departure from the US border yard.

At each milestone point Penske has identified the time it should take and which particular party is responsible for the freight at those given points. Data is pulled from Penske’s transport management system and refreshed every 30 minutes to track all milestone events and flag up when shipments run past their due time. It is measured against the expected arrival time at the OEM’s manufacturing plant. The system allows responsible parties to intervene in the process much sooner to get the shipment back on track without resource to more expensive expedited freight. 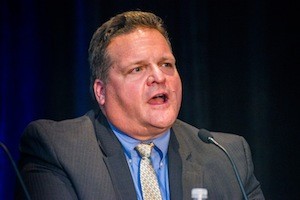 “Our planners look at this and see where things start to fall behind and they intervene and make a call to find out what is going on with that specific activity for that specific load,” explained Flucht. “That enables us to get that shipment back on track to meet the times we need to protect our customer.

He said the system gave everyone involved visibility into the 58-hour window that was previously hidden and created an expectation as well as helping ot prioritize more urgent loads.

Trade imbalance
One further issue that needs addressing for the sake of efficiency is the imbalance in trade flows between the two countries. According to Grady there is a 40% imbalance in north-south trade which is causing a rate rise on transport. That compares with the 10% imbalance on trade between the US and Canada.

Looking ahead there are a number of initiatives in the pipeline to solve the issue of delays and security. Landstar is looking into coloading and it is something the Mexican government is now willing to talk about. So is security and the expansion of patrols on highways in Mexico, which is going to be a big focus for NAFTA discussions going into January.

One of the most important initiative is the automation of the customs clearance process, which logistics providers and OEMs are working on with the US-Mexico Chamber of Commerce this year.

Grady said that the idea is to be able to take a truck coming north out of Mexico and clear customs without delay, similar to what Landstar does into Canada.

“They are going to be expanding the rail intermodal capacity,” added Grady. “There will be a change coming in the inspection process on rail to pre clear the trains, which they are predicting will be ready by June next year that would add 40% capacity clearance.