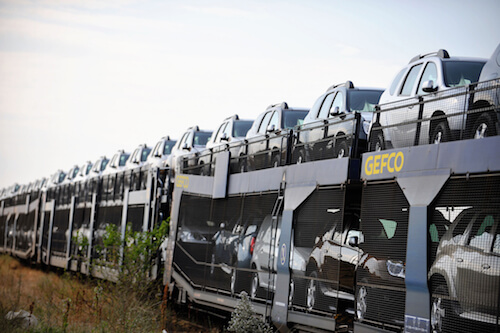 French carmaker PSA Group, which owns Peugeot, Citroën and Opel/Vauxhall, has said it will sell its remaining 25% stake in Gefco, its former logistics subsidiary.

The carmaker said in a statement that “Gefco’s operational performance and the diversification of its client portfolio no longer [make] it necessary for [PSA Group] to have a minority stake in the capital”.

In terms of its operational performance, Gefco recently reported annual turnover of €4.4 billion (around $5.5 billion) and said it was looking for 10% growth this year. Around 70% of Gefco’s revenue is currently accounted for by the automotive sector and it posted €201m in earnings, up 16% compared to 2016.

In terms of diversification, Gefco is looking to move further beyond its traditional automotive market into other sectors including aviation, energy and healthcare, and is targeting €2.1 billion in revenue this year from non-PSA business. The company said that it achieved an 8% sales growth in sectors outside PSA Group in 2017.

Sales historyOnce its exclusive owner, PSA sold a 75% stake in Gefco to Russian Railways (RZD) back in 2012 for €800m to raise cash during a tough period for the carmaker. The currently undisclosed sum PSA is selling the remaining 25% of Gefco for could also come in useful, given the capital requirements all vehicle manufacturers face.

RZD said back then that Gefco would play an integral part in a new rail freight corridor linking Europe with Asia, while Gefco said it intended to further its geographic expansion, including in China, as well as in Eastern and Central Europe, particularly in Russia. The most recent evidence of that came in November last year when Gefco handled its first dedicated block train of containerised automotive parts between China and France.

Since then, Gefco has indicated that RZD was considering selling a partial stake in the company though that is not currently under discussion, according to Gefco’s president and chairman, Luc Nadal.

Gefco remains PSA’s principal logistics provider and back in 2016 signed an €8 billion, five-year deal with the carmaker, with fourth-party logistics (4PL) services for global operations featuring prominently within the contract. The deal gave Gefco exclusive responsibility for managing the complete supply chain for wholly-owned PSA activities, including for inbound, finished vehicles and spare parts logistics. It already had a deal with GM Europe to provide services for Opel/Vauxhall, signed in early 2013. Acting as a 4PL for the carmaker, Gefco started managing GM’s inbound and outbound supply chain across Europe, Russia and Turkey, combining volumes with those from PSA. That connection was strengthened when PSA bought the Opel/Vauxhall business from GM last year for €2.2 billion.

While PSA could itself diversify in its issuing of tenders for logistics services beyond Gefco in the future, for now the arrangement seems to be working well for it.

In a statement issued this week, Gefco said it remained a strategic partner for PSA and was confident in its “ability and willingness to provide continued outstanding quality and value” to the carmaker, as well as automotive more widely alongside the new sectors it is targeting.

“For 69 years, Gefco has been driving strong development around the world through innovation in the automotive sector and has a unique expertise in providing smart and flexible solutions for complex supply chains in industries such as aerospace, consumer goods and pharmaceuticals,” it stated.

Watch out for an interview with Gefco president and chairman Luc Nadal In the April-June issue of Finished Vehicle Logistics, in which he discusses the firm’s new approach to business, its plans for the future and the value of some of its recent automotive acquisitions