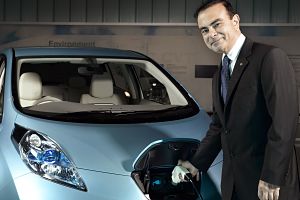 The Renault-Nissan Alliance has formed a new joint venture (JV) with Dongfeng Motor Group in China to develop and manufacture electric vehicles in the country.

Named eGT New Energy Automotive, the joint venture will be half owned by Dongfeng, with Renault and Nissan each taking a 25% stake.

Renault has had a local manufacturing and sales joint venture with Dongfeng since 2013. The Dongfeng Renault plant was built at Wuhan and started production in February 2016.

The newly formed entity will be based in the city of Shiyan, Hubei Province and the electric vehicle will be made at Dongfeng’s Shiyan plant, which has a manufacturing capacity of 120,000 vehicles a year.

Production is expected to start in 2019 with the first model jointly developed by the companies on a Renault-Nissan Alliance A-segment SUV platform, according to a statement.

“The establishment of the new joint venture with Dongfeng confirms our common commitment to develop competitive electric vehicles for the Chinese market,” said Carlos Ghosn, chairman and CEO of the Renault-Nissan Alliance (pictured).

According to the China Association of automobile manufacturers, 256,879 battery electric vehicles were sold in China in 2016, up 121% from the previous year.

Earlier this month, Ford signed a memorandum of understanding with China’s Anhui Zotye Automobile to explore a joint venture for the manufacture of a new brand of all-electric vehicles in the country.

In July, Daimler and its Chinese partner, BAIC, agreed to invest 5 billion yuan ($735m) in their local production joint venture, Beijing Benz Automotive Company (BBAC), as they prepare it for electric vehicle production from 2020.

Finally, in May, The China National Development and Reform Commission (NDRC) gave final approval for local carmaker JAC and Germany’s Volkswagen Group to jointly produce a new brand of passenger electric vehicles in the country.