Renault-Nissan and Mitsubishi will export sedan from South Korea 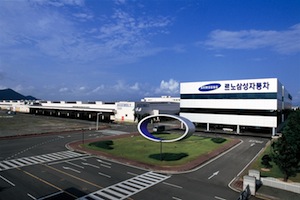 As part of a new wide-ranging agreement between the Renault Nissan Alliance and Mitsubishi Motors Corporation, which will involve shared products, technology and manufacturing capacity, the companies will export a D-segment sedan model from the Renault Samsung Motors (RMC) plant in Busan, South Korea for sale in the US and Canada under the Mitsubishi badge. A second sedan model is planned for the C-segment but the manufacturing location is still under discussion, according to the joint statement from the companies.

Renault-Nissan and Mitsubishi are also expected to co-develop a small car that will include an electric version that can be sold globally. The individual carmakers were among the first to introduce mass-marketed zero emission vehicles.

Nissan and Mitsubishi Motors already have an existing joint-venture called NMKV, set up in 2011 for the purpose of co-developing a range of Kei cars (or super mini cars) for both brands. The first of these – the Nissan Dayz and Mitsubishi eK wagon – went on sale in Japan this year. Both products are manufactured at the Mitsubishi Mizushima plant in Japan. Mitsubishi also makes the i-MiEV electric vehicle there.

“Nissan and Mitsubishi Motors have jointly benefited from several collaborations in the past, most recently the successful joint-venture on Kei cars in Japan,” said Renault Nissan’s CEO and president, Carlos Ghosn.“I welcome the direction being taken towards this broader cooperation, creating new opportunities for Renault in addition to further leveraging the productive relationship between Nissan and Mitsubishi Motors.”

The companies would not confirm planned production or export figures for the first sedan from Busan as discussions were at an early stage, but any volume will be good news for the plant, which is under-utilised. Between January and August last year Renault Samsung saw a 40% on-year decline in total sales of vehicles produced at the plant. However, output will be boosted in the second half of next year when the plant takes on production of the Nissan Rogue, with annual output expected to hit 80,000 units. This will supplement production of the Rogue in North America, and most of the vehicles produced in Busan, including the new sedan, will be for the North American market.

RMC also launched the new SM5 last year, and the QM3 and SM3 Z.E. this year.

In October Mitsubishi Motors North America’s sales hit almost 5,000 units, up 19.4% compared to October 2012. Sales of the US-built Outlander Sport led the way with more than 2,000 sold, an increase of 19.9% for the month compared to prior year sales.  Sales of the all-electric Mitsubishi i-MiEV are up 114% year-to-date. Overall sales in the US between January and October this year were close to 50,000 units, while in Canada they were close to 18,000.