As the South American giant speeds away from the financial crisis, the country’s notorious infrastructure and challenging terrain is causing problems again. But that is not stopping the delivery of buses and trucks, just slowing it down, writes Tony Danby.

South America’s largest economy, Brazil, has managed to achieve fast-paced vehicle sales this year and expects the second half of the year to remain strong. After the economic crisis and tight credit conditions forced heavy vehicle manufacturers to tap stocks at the end of 2008 and early 2009, OEMs are recording sales that currently outpace their counterparts in European countries and the US. 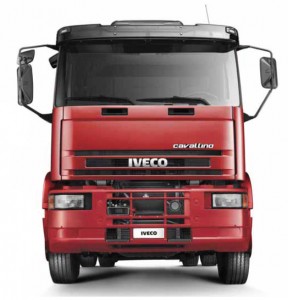 Brazil, which is the 10th-largest economy worldwide, saw economic output falter by 0.2% in 2009 but estimates suggest growth of as much as 7% this year. The Latin country, which is part of the BRIC group of emerging economic powerhouses with Russia, India and China, is seeing widespread growth from commodities through to carmaking. This is helping Brazil’s economic growth to motor ahead while lifting millions out of poverty.

Brazil’s government has helped to promote vehicle sales by ensuring a flow of credit to manufacturers, and by deploying tax breaks for truck sales. For instance, the government has subsidised historically low interest rates through the national development bank, BNDES, to help stimulate truck and bus sales, says Antonio Cammarosano, director of commerce for MAN Latin America. The government is also investing in infrastructure through the government’s infrastructure investment package PAC. Infrastructure projects help to stimulate growth, which boosts the economy, and this has a knock-on effect that leads to companies buying more trucks. Back in 2007, Brazil’s government launched its infrastructure investment package PAC1 to implement 2,471 projects and invest BRL650 billion ($367 billion). Recently, ahead of the presidential elections in October, the government announced PAC2 with BRL959 billion to be directed to energy, housing and transport projects from 2010 through to 2014 and investments of BRL631.6 billion from 2014 onwards. Moreover, the Brazilian government also axed the IPI industrial products tax on new trucks until June 30, which makes the vehicles cheaper to buy.

Indeed, truck and bus manufacturers have seen brisk sales this year in Brazil’s expanding economy. For instance, Brazil’s Motor Vehicle Manufacturers Association, known as Anfavea, said domestic sales of trucks hit 53,401 units from January through April, up an impressive 70.3% for trucks from the same period a year ago. Buses reported 10,660 units of sales in the same four-month period, up 45.8% on the same period a year ago.

According to Anfavea, truck and bus sales for April continued to speed ahead. Truck sales in April were at 14,247 units, 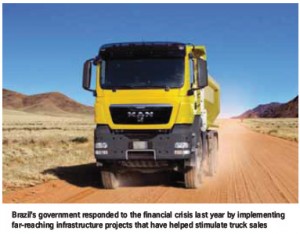 In such a fierce market, international and local vehicle makers are jostling to secure market share. European companies such as MAN Latin America, Iveco, Mercedes- Benz, Scania and Volvo compete with US manufacturer Ford and Brazilian vehicle maker Agrale.

Among the players vying to secure market share, Italian truck and busmaker Iveco–helped by investments of BRL570m between 2007 and 2011–plans to produce 18,000 buses and trucks this year as the Brazilian economy roars ahead. Iveco produced 10,000 trucks and buses last year, compared to 10,800 units in 2008, as the economic downturn crimped demand. “Iveco is very aggressive,” Gustavo Peret Dias says, Iveco’s manager for transport.

Rival European truck and bus maker MAN Latin America also holds aggressive targets for 2010. Adilson Dezoto, logistics director, says that the company aims to keep pace with the Brazilian market’s growth of between 45% and 50% this year compared to last year. The company shifted around 40,000 trucks and buses in 2009 when the economic downturn slowed sales from 55,000 units in 2008. “We see a fast growing market,” he says. 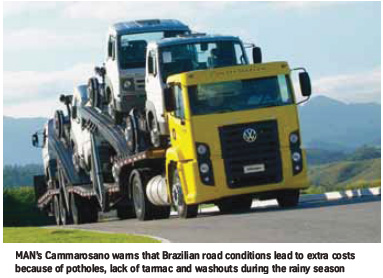 Dicey roads, creaking bridges and traffic jams
Brazil–with a population the size of Germany, France and the UK combined–throws up a host of challenges to logistics specialists when transporting heavy finished vehicles. Logistics experts for heavy vehicles, like their counterparts in general automotive logistics, complain of precarious roads, creaking bridges, overstretched ports and airports, and crowded cities. They also complain of the lack of rail. Cammarosano warns that Brazilian roads lead to extra costs because of longer lead times and high levels of maintenance. He said that roads in the remote north or northeast of Brazil are often strewn with potholes and without tarmac. In the rainy season, lead times are dramatically delayed as roads often become impossible to pass. It is necessary to change the route depending on the weather, he says. The dangerous roads also hike insurance premiums.

Even in major cities such as São Paulo logistics hurdles appear. Residential neighbourhoods, such as Jardins, suffer cars jammed bump-to-bumper in the narrow streets. While nearby the Marginal Pinheiros, a motorway lining the river that runs through the city, grinds to a halt at 17:00 as thousands of cars emerge from car parks under the city’s office blocks.

Industry experts say that Brazil’s ports are also often blocked by long queues of trucks waiting to unload or strikes that can impair exports. They warn that an “infrastructure blackout” could occur when the general economy gets back on it feet. The blackout may not happen immediately but the roads and ports will become overloaded in the near future if no action is taken, they say.

Iveco’s Dias explains that Brazil also felt the effects of the recent eruption of Iceland’s Eyjafjallajokull volcano. This highlighted how unforeseen events can thrust supply chains into chaos as imported parts were unable to reach Brazil from Europe with aircraft grounded. Logistics companies and OEMs alike had to scramble to find alternatives and backups to meet the company’s needs, Dias says.

Iveco focuses on Brazil
Italian manufacturer Iveco is mainly focused on the Brazilian domestic market that accounts for 90% of its deliveries, while exports account for 10%. Iveco transports its finished vehicles from the company’s BRL30m assembly plant Centro de Desenvolvimento de Produtos in Sete Lagoas in Minas Gerais state, which opened in 2008. Iveco transports vehicles from the plant, located 70km from Belo Horizonte, to around 90 dealers across Brazil. The company plans to expand the number of dealers to 120 by 2011. Elsewhere, Iveco trucks vehicles to the nearby Rio de Janeiro or Santos ports for export. Dias says that logistics is a key aspect in the company’s strategy to boost production. “It is vital to distribute the vehicles by truck to key points with good partners,” he says. Iveco therefore prefers to transport its new vehicles on the back of sturdy trucks, rather than driving the new vehicles to dealers. By moving the new vehicles by truck, Iveco avoids any damage, he says. “Vehicles therefore arrive at their end destination in perfect condition.”

Dias says that the challenges of transporting regular cars and big trucks are broadly similar. But, while the US and Europe may have a lot more standardisation of bridge heights or trucks heights, it is common to find a wide number of variations in Brazil, he says. For instance, large 23-tonne Iveco trucks are sometimes unable to squeeze through narrow streets in built-up areas. In other cases, the company’s 4.1- meter-high trucks are unable to scrape under low-built bridges. As a result, careful preparation is needed to plan routes, Dias says. 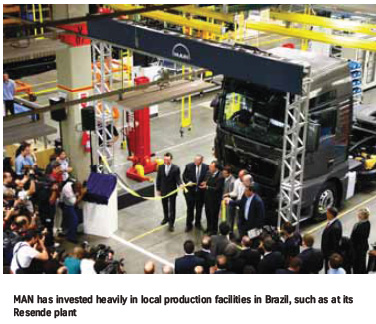 At the plant in Sete Lagoas, the trucks move swiftly from the assembly line to the patio. Vehicles wait on average 10-15 days to be collected and distributed to dealers. This depends on the demand and customers needs, but currently with strong demand they won’t wait long, Dias says. While in the yard, Iveco employees check the vehicles again for damage. Iveco then has relationships with a range of partners to handle the different forms of multi-modal transport. Iveco uses CMA and Grimaldi for sea routes; JAS, DHL and Ventana Logistica for air routes, and local logistics company Sada for its outbound trucking operations.

In the case of trucking by road, Sada, which is also retained by Fiat, comes to collect the vehicles at Iveco’s plant. They do some basic checks for the right invoices and paperwork and then load the vehicles. Sada’s employees then drive them to their destinations across thousands of miles to more than one hundred dealers in the giant Amazonas state through to the industrial heartland of São Paulo.

Lead times are often slower in Brazil than in Europe or the US because of the distances on often unsuitable roads. For instance, from the Sete Lagoas plant to Manaus, the capital of Amazonas state in the heart of the rain forest, can take around 16 days. When the rainy season is in full force, roads can turn into mud and chunks can be washed away. In some areas vehicles also need to be transported by barge to reach remote towns.

Although the bulk of transport of finished vehicles is domestic, Iveco also handles import and exports of vehicles and parts. Iveco imports parts from Italy and other plants in Venezuela and Argentina. The company occasionally also imports vehicles from Italy for specific orders, but this is rare, Dias reveals.

Iveco also regularly ships vehicles to neighbouring Argentina by either road or sea. The company is currently using sea routes from Rio de Janeiro to Argentina because the price is more attractive than road. The vehicles are also less vulnerable to damage in the ships than on the roads. 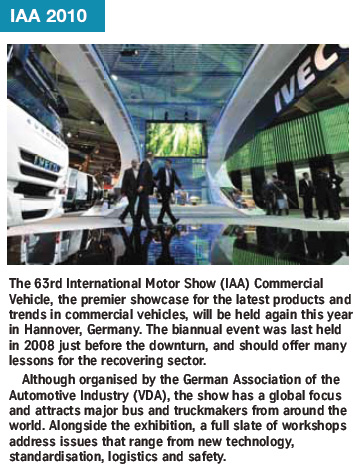 American markets struggling to shake off the recession. The Brazilian real, which skyrocketed almost 40% against the dollar in 2009, also hampered the competitiveness of Brazilian exports.

Moreover, Dias warns that with most OEMs ramping up production and the economy heating up, shipping companies are eyeing higher freight rates. It is a constant battle to control freight prices, he says. But Iveco, combined with Fiat and Case New Holland, part of the giant Italian group, can combine their muscle to push for more attractive prices. Moreover, as Iveco produces more vehicles, this also strengthens its bargaining power, he says.

MAN trucks on
MAN’s Cammarosano says that MAN, Brazil’s No.1 seller of trucks this year to date, usually arranges with its customers to collect their new finished vehicles at its plant in Resende in Rio de Janeiro state. They then transfer the buses or trucks to their end destination. For instance, the company’s flagship Volkswagen Constellation Truck, covering the 13-57 tonne segment, or buses, are taken by a powerful truck to their destinations. The transport truck can carry three big trucks, classified at over 13 tonnes, or six small trucks, classified at between 5 and 9 tonnes. Then, the chosen carriers drive them to the more than 145 dealers across the country, he says. The Volkswagen Worker range, which covers the 8-31 tonne category, is driven to the dealers. MAN sold 16,239 trucks and 2,802 buses in the first four months of 2010.

and North American customers dried up and neighbouring Argentina’s economy also stuttered. As a result, vehicle makers such as Iveco or MAN are prioritising the expanding Brazilian market. However, exporting trucks and buses must take into account cost, available types of transport, required delivery dates and ultimately client requirements, Ricardo Albuquerque of MAN Latin America says. He reveals that even though neighbouring Argentina is geographically close to Brazil, transport is usually undertaken by sea. However, when trucks have equipment that needs to be locally installed such as tipping or mixing devices, then clients prefer transport by road, as it is significantly more cost efficient than by sea as ocean freight, as opposed to road freight.

In the case of transport between Brazil and Chile, for instance, it is possible to use road during most of the year. But all transport must be done by sea during winter when the Andes Mountains are impossible to cross, Albuquerque says. Whether navigating through snow-peaked mountains or muddy roads, logistics operators need to plan carefully ahead. Brazil’s roads, crowded ports, and lack of rail all provide challenges to deliver heavy trucks or buses. And, with the economy booming, the flood of orders will keep on arriving. European manufacturers such as Iveco and MAN will therefore remain busy. “The logistics is very complex, but in the end we get there,” Cammarosano says.