Robinson takes on logistics strategy for Mazda after Beyer’s exit 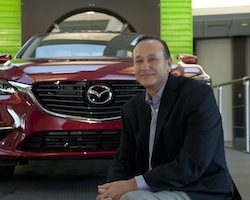 Following a reorganisation of roles at Mazda North America Operations (MNAO) earlier this year, Michael Robinson has taken on a new role as logistics strategy manager. Robinson was previously logistics quality manager at the company.

His new responsibilities were previously under the remit of Michael Beyer (pictured), manager of vehicle logistics, who has now left MNAO, the company confirmed.

Talking about the internal reorganisation at MNAO that led to Robinson’s new role, a spokesman said the focus was on streamlining communications with the goal of better serving Mazda’s customers.

“We feel that these moves will make for a more effective process internally and, ultimately, more transparent communications, with the right messages going to the right customers at the right times,” said a spokesperson for the company.

Beyer was in the role of manager of vehicle logistics with Mazda for more than six years, having moved to it from his job as manager of national port operations for the carmaker. In 2015, he told Finished Vehicle Logistics that the logistics behind the carmaker’s Mexican plant would be crucial to its success in the US and in global markets.