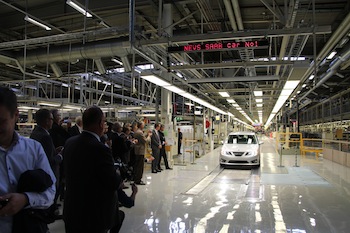 Saab production has restarted at the Trollhättan plant in Sweden after two and half years, following its closure when the previous company went bankrupt in 2011. The plant is now being run by National Electric Vehicle Sweden (NEVS), which took over Saab in August last year. And NEVS has had its work cut out for it over the last year convincing suppliers to get back on board, according to the company.

The first car off the assembly line this week was a petrol engine Saab 9-3 Aero Sedan. The company is starting production very modestly at around 10 vehicles a week initially, but it plans to increase this according to demand and will be adding an electric vehicle to the output in Spring 2014.

Sales of the vehicles produced at Trollhättan will be focused on China, though a small number of vehicles are being sold directly to customers by Nevs via its website for pick up at the factory. Those Swedish sales will begin next week (December 10).

The company’s gateway to China is through the City of Qingdao, which has a 22% share in NEVS, itself majority-owned by Hong-Kong-based NME Holdings. Qingdao has already placed a pilot order for 200 of the electric vehicles that will be made at the Swedish plant next year. A spokesperson for the company said that the logistics details behind the exports to China were in too early a stage to discuss in detail and that, for the Saab 9-3, the retail organisation was still being established.

The company is also planning to offer service and parts distribution in partnership with Orio, formerly Saab Automobile Parts.

“It is truly a complex mission to start a car production process which has been still for two and a half years,” said Nevs’ President Mattias Bergman. “It is very pleasing that we have embarked on a journey where we want to and will make a difference with our partners and customers. Our electric car will be launched next year, and already today we can offer Saab cars with continued high, proven performance and quality.”

A question of trust
The complexity of restarting production at the plant has in part been to do with rebuilding the supplier base. In a statement Nevs said that its purchasing department had spent the last year building partnerships around 400 top tier suppliers to secure production; with the lower tier suppliers taken into account, this added up to a global supply chain involving around 2,400 companies. Much of that work was about restoring confidence in the supply base.

Many suppliers, like the factory workers, found themselves out of pocket when the previous company, which Spyker International had taken over from GM in 2010, was in its final days. Several suppliers of parts (and a few of logistics services) halted the shipment of components to the Trollhättan assembly plant because of unpaid invoices and the plant was unable to continue production (read more here).

Logistics considerations were important, a NEVS spokesperson told Automotive Logistics, but the main issues about the supply of parts centred around three questions: were the suppliers still in business; were they still producing the components needed for Saab production; and crucially, were they willing to become a supplier again for NEVS’ plan to start making the Saab.

Some were still in business, in most cases they were still making the required components and some, but not all, were willing to get involved again in supplying those parts for Saab production.

“It's been an intense year committed to ensuring NEVS start of production,” said purchasing director Per Svantesson. “I see our established partnerships as a trustful beginning of the long term and strategic relationships we want to build together with our subcontractors.”

The company said that ensuring that the supply chain was working properly was, along with quality considerations, one of the reasons it was beginning production gradually, but it intended to expand into markets beyond China and Sweden “where we see potential for growth and profitability”. Given the caution it could be some time before full capacity of 120,000 per annum is reached.