Truck maker Scania has signed a contract with European short-sea ro-ro operator UECC for the movement of its finished trucks from Belgium to Russia. 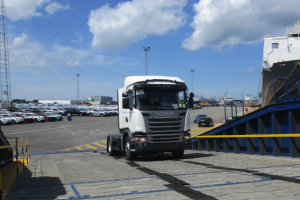 Twenty trucks, made at Scania’s plant in Zwolle in the Netherlands, were loaded at the Belgian port of Zeebrugge earlier this month for onward shipment to the port of St Petersburg. UECC said it would be loading Scania units on a weekly basis between the two ports.

Last year Scania sold 2,600 trucks on the Russia market, the majority being two-axle tractors fitted with Scania’s 13-litre engine. Along with trucks made at the Zwolle plant, Scania ships trucks destined for the Russian market from its São Bernardo do Campo plant in Brazil. According to a spokesperson for the truck maker some of those trucks, mainly construction vehicles, are also delivered as knock-down kits, which are assembled with specifications for the Russian market at Scania’s delivery and preparation centre in Saint Petersburg, which opened in 2010.

The trucks loaded at Zeebrugge are being shipped aboard UECC’s dual fuel carriers, Auto Eco and Auto Energy, which can run on liquefied natural gas (LNG). They are operational on UECC’s Baltic service which runs between Southampton in the UK and the port of St Petersburg via Germany, Sweden and Finland.

“This is a milestone for UECC and we are very honoured to be awarded such a contract by a company like Scania, focusing on sustainable transportation,” said UECC in a statement. “It is also very exciting to add Scania to our customer portfolio and encouraging that our focus on Greener Sea Transport Solutions, along with our actions and persistence, have delivered this positive outcome.”