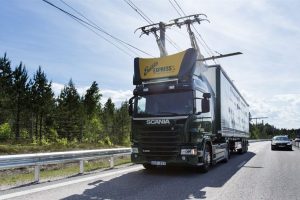 Truckmaker Scania has welcomed plans by Sweden and Germany to speed up the development of electrified road technology.

The plans are part of a new innovation partnership between the two countries launched on Tuesday (January 31st) during a visit to Sweden by German Chancellor Angela Merkel. The partnership aims to strengthen cooperation between the two on development and application of new technology in a number of areas, including in terms of mobility and electrified roads.

VW-owned Scania is already working on electrified road technology itself in conjunction with German firm Siemens and has said it is “ready to take the next step from field test to real commercial implementation”. Their work together contributed to the opening of the world’s first electrified road for heavy goods vehicle traffic in Gävle, central Sweden in June last year along a 2km stretch of the E16 highway (pictured).

“It’s an honour to be able to explain Scania’s work on the electric road to Chancellor Merkel. The agreement between Sweden and Germany underlines the value of strategic partnerships in creating solutions for the future of sustainable transport, something to which Scania is fully committed,” said Scania’s president and CEO, Henrik Henriksson, after Merkel’s visit.

Earlier this month, Scania and Toyota announced a three-year pilot project in Singapore to test the use of autonomous trucks on public roads.