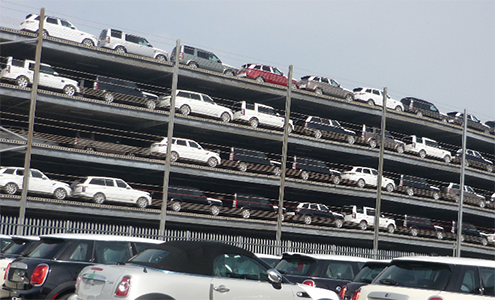 The company said 80% of vehicles handled there last year were for export.

High and heavy ro-ro cargo also went up, with the total rising by an average of over 300 units a month.

SCH said it had increased its share of the ro-ro cargo handled through Southampton to an estimated 28%, thanks largely to winning a contract with Euro Marine Logistics (EML) mid-year. A joint venture between Mitsui OSK Lines and Höegh Autoliners, EML carries all Renault vehicles arriving at the port from France and Spain.

SCH director Lee Davis said: “Southampton has invested heavily to consolidate its leading role in the UK for handling new vehicles. We have benefitted from this commitment.”

SCH handles imports from and exports to mainland Europe, the Middle East, East Asia and North America and deals with a range of finished vehicle carriers calling at Southampton port, including Höegh Autoliners, NYK Line, Glovis and Eukor Car Carriers.

The company, which also carries out stevedoring and related activities at other ports including Liverpool, Portsmouth and Sheerness, last year signed a four-year deal with BMW for technical preparation of cars and motorcycles at Southampton and Sywell.