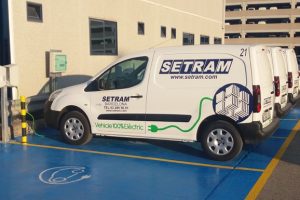 Spanish finished vehicle logistics provider, Setram, has deployed four electric vehicles (EVs) to help with operations at its car terminal in the port of Barcelona. Four Peugeot iPartner vans are being used at the terminal, which can store 13,300 vehicles. The vans are being leased from Spanish car rental and fleet manager, Alphabet.

The EVs will be used by staff to move around the complex, which covers 250,000 sq.m. Setram has also installed some fast-charging stations so the EVs are kept as productive as possible.

A spokesperson for Setram said the company would consider increasing the EV fleet, based on how the current four vehicles performed.

The introduction of the vehicles follows a feasibility study carried out in summer of 2015 and is part of Setram’s stated aim to comply with environmental management standard ISO 14001.

From January 1st Spain is implementing its Movea 2 subsidy plan, which will see the government put €17m ($18m) at the disposal of industry and individuals to promote the adoption of alternatively fuelled vehicles. Movea stands for Mobility with Alternative Energy Vehicles.