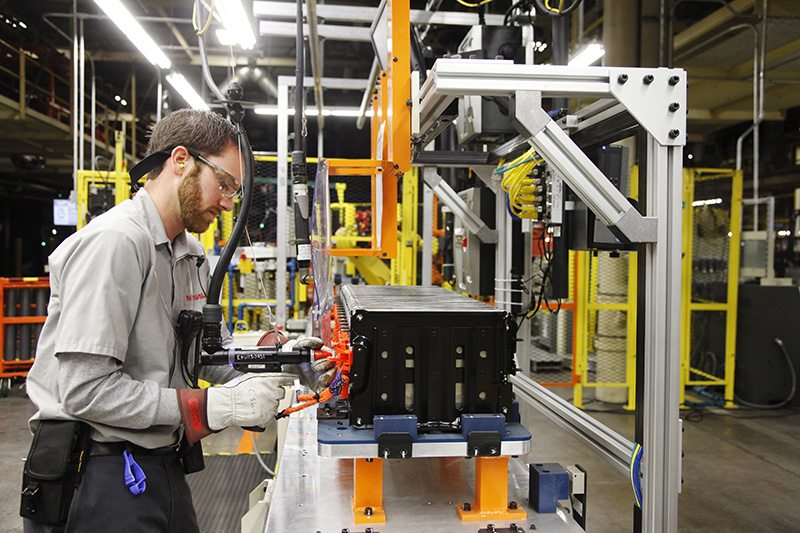 Production of lithium-ion batteries, like these ones at Nissan's Smyrna Vehicle Assembly Plant, looks set to soar

Accelerating growth in electric and hybrid vehicle production is opening up a range of new supply chains across all areas of the automotive industry – not least in battery cell production.

With vehicle manufacturers stepping up both the volume and range of electric vehicles (EVs) and hybrids they produce, battery makers are building new factories the world over in an effort to meet anticipated demand. Meanwhile, despite the recent decision by the US administration to withdraw from the Paris climate accord, other governments are targeting long-term targets to increase EVs, promote battery production, increase charging points, and phase out diesel and petrol engines, including in China, Norway, France and, most recently, the UK.

While it is undeniably true that EVs and hybrids account for just a small proportion of all vehicles produced at present, their potential for huge growth has excited equipment suppliers. The game-changer came a few years back when technological advances, mainly in the lithium-ion (Li-ion) battery, made journeys of 300km or more between charges possible.

Battery makers have stepped up output accordingly. Panasonic, for example, which claims to have the largest share of the market, opened a new Li-ion battery factory in Dalian, northeast China, only last April as a joint venture with the Dalian Levear Electric Company. The goal is to develop the new factory into a core manufacturing site in China to strengthen Panasonic’s automotive battery business.

The company will also start production of automotive Li-ion batteries in the US next year and has upped output at its factories in its home country of Japan.

Panasonic has an established track record in this area. Back in 2012, it signed supply deals with Toyota and also with Ford in the US, and a year before that with Tesla Motors – then an electric vehicle powertrain component supplier to the infant EV industry.

Things have moved on a lot since then and others are now seeking their slice of an ever-growing cake. They include GS Yuasa, which following an announcement in January is constructing a plant to produce up to 4m automotive lead-acid storage batteries annually on the Nangang industrial estate in Tianjin, northern China. Operations are scheduled to begin in the third quarter of next year. The Japanese company is spending 17.5 billion yen ($155m) on the project.

“The automobile industry in China has been growing continuously and the demand for start-and-stop vehicles and fuel-efficient cars is expected to expand rapidly, given the tightening of exhaust emission regulations,” it said. 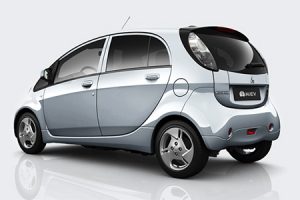 Navigant Research projects the global market for automotive batteries will be worth $30.6 billion by 2024, as demand for electric vehicles increases

Elsewhere, LG Chem is putting up a battery plant in Wrocław, Poland, with production due to get underway before year-end. The 400m South Korean won ($350m) factory is being designed to turn out more than 100,000 Li-ion batteries a year.

“We will turn the Poland EV battery plant into a Mecca of battery production for electric vehicles around the world,” claimed UB Lee, head of the group’s Energy Solution Company, when the plan was announced last September, adding that as the first large-scale automotive lithium battery production plant in Europe, it would play a vital role in stimulating the EV industry across the whole region.

LG Chem has stressed it will meet local customers’ requests by building a fully integrated production system, turning out all the battery components from electrodes to cells, modules and packs for the first time in Europe.

The Polish location will also cut down on logistics costs, it claims, enabling it to supply products to carmakers in a timely manner and enhance its partnership with local clients.

LG Chem already has automotive battery plants in South Korea, the US and China. The new Polish plant will take group-wide capacity to more than 280,000 batteries a year. While each plant mainly caters to vehicle makers close to its locality, the factory at Ochang in South Korea also supplies compatriot automobile manufacturers and controls overall supply needs for global customers, such as Daimler of Germany, which produces the Smart EV range.

LG Chem’s claim of a European first has not been lost on the likes of German chemical company BASF which back in June noted that several battery cell producers had either started construction in Europe of battery manufacturing plants for EV powertrain systems or pledged to do so.

BASF itself is planning to initially invest up to €400m ($460m) as it builds a series of production plants in Europe for some of the raw materials used in Li-ion batteries. As a first step it has signed a memorandum of understanding and entered exclusive negotiations with Norilsk Nickel (Nornickel) for supply of nickel and cobalt feedstock from the Russian miner’s metal refinery in Harjavalta, Finland.

[mpu_ad]The pact will, in the German company’s words, “provide an optimised and secure supply chain for electric vehicle battery cell producers in Europe.” Kenneth Lane, president of its catalysts division, added that the resulting supply chain robustness would enable BASF to expand its production of battery materials on a global scale.

Sergey Batekhin, head of sales, commerce and logistics at Nornickel, added: “This project is an opportunity to increase our exposure to the high-potential and fast-growing rechargeable battery materials market. The electric vehicle industry is set to contribute to a sustainable development.”

Industry analysts are already producing some mind-boggling numbers about the potential of the EV sector.

In a recent series of research reports collated by financial news information website FinancialBuzz.com, forecasts for the international lithium-ion battery market’s value rise as high as Variant Market Research’s $56 billion by 2024 at a compound annual growth rate (CAGR) of 10.6%, starting in 2016. These figures include Li-ion batteries for laptops, mobile phones and other uses.

Limiting itself to Li-ion batteries’ automotive applications, Navigant Research projects the global market will be worth $30.6 billion in 2024, up from $7.8 billion in 2015.

Charging aheadThe distances owners can go in their electric or hybrid cars will in effect be extended even more as a greater number of charging stations are built.

Market Research Reports Search Engine forecasts the global EV charging station market will increase at a CAGR of 30.8% between 2017 and 2025, taking its value to $37.48 billion by the end of 2025.

Little wonder, then, that carmakers are expanding their knowhow of the technology employed to power electric vehicles. Volkswagen, for example, plans to treble investment in EV and battery development during the next five years, spending €9 billion ($10 billion) compared with €3 billion in the past five. By the end of 2018, the group plans to offer more than 10 new electrified models, adding 30-plus more battery electric vehicles by 2025. 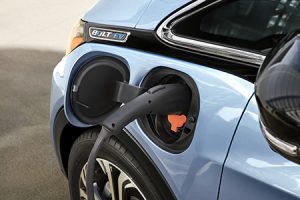 In a strategy statement, the German company described the battery as accounting for 20-30% of future value-added for fully electric vehicles. The group’s goal is to build up expertise with partners to make it technology leader in solid-state batteries by 2025.

But it has also warned that a potential problem may lie ahead for the industry: a lack of Li-ion batteries if new investment is not made for more battery cell factories in addition to those announced. In a presentation in late June, Ulrich Eichhorn, Volkswagen’s research and development chief, said he believed 40 more ‘gigafactories’ would be needed to avoid a shortage of batteries for the volumes of electric cars VW plans to sell.

His reference to ‘gigafactories’ refers to the $5 billion plant Tesla is building in Nevada which is expected to produce, at full capacity, more Li-ion batteries annually than the entire current world capacity – enough for more than 1m all-electric vehicles per year.

Meanwhile at the vehicle sales end of its operation, Tesla says it will deliver the first of its own Model 3 cars to customers at the end of this month.

Elsewhere, Mercedes-Benz has just revealed that it has chosen its Untertürkheim plant near Stuttgart, southwest Germany, to be home to its fourth battery manufacturing factory. “In the coming years, we plan to produce a rising number of powertrains for conventional and hybrid vehicles,” said Markus Schäfer, member of the company’s divisional board for Cars, Production and Supply Chain.

The plant will complement parent Daimler’s two battery production sites in Kamenz, Germany, and another in Beijing, China.

Daimler and Chinese partner BAIC have also agreed to invest 5 billion yuan ($735m) in their joint venture, Beijing Benz Automotive Company (BBAC), as they prepare it for electric vehicle production from 2020.

Another significant development for the automotive industry (and some other sectors of the economy for that matter) is Volvo’s declared intention to put an electric engine in every car it makes by 2019, marking an end to its production of internal combustion engine-only cars. 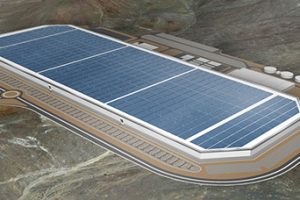 Increased production of EVs and hybrids should prove lucrative for miners and suppliers of lithium, nickel, manganese, phosphate, cobalt, graphite, carbon and copper, all of which will be going into vehicle production for the first time or in greater quantity than at present.

For those in the automotive supply chain, this raises important questions about how to handle and store the greater variety of materials, management of the processes involved, and the range of health and safety legislation related to them. And when a vehicle reaches the end of its life, the same questions will apply once again to those in the recycling industry.

Things naturally change over time, but the arrival of large-scale electric vehicle and hybrid production threatens to be a revolution, not an evolution, in the automotive production and supply chain sectors.