Standoff between the US and Turkey raises questions for OEMs 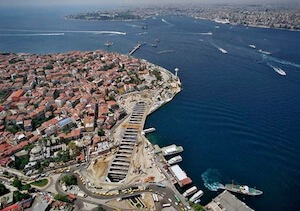 The collapse in the value of the Turkish lira and the political stand-off between Turkey and the US have some potentially serious consequences for the continued growth of the automotive sector in the country.

Car and light van production in Turkey has grown steadily in recent years, to around 1.4-1.5m vehicles annually. Ford has made its major plant there the sole European factory for the Transit, and along with the small Transit Courier and a large truck (the Cargo) made for the local market, the plant has a capacity of close to 350,000 units a year. Turkey is also the location for Fiat’s small van production, some of which are currently sent to the US for sale under the Ram brand. Toyota, too, ships the C-HR crossover from Turkey to the US, as well as into Europe. Meanwhile for Renault, Turkey is the main production location for the Clio, as well as some Meganes; and Hyundai uses Turkey as its European supply point for its small cars, the i10 and i20, with an SUV to join the production roster from 2021.

With five manufacturers running major operations in the country, along with a small Honda plant, which also ships vehicles into the EU (having been mainly supplying the local market for many years), Turkey is clearly a major cog in the global automotive manufacturing network.

The industry’s importance to the country’s economy is clear, accounting for around $30 billion in export value this year – the largest of any industry in Turkey, according to the Turkish automotive exporters association, OIB. Vehicle manufacturing operations in Turkey are also central to the carmakers’ regional – and in some cases global – product and manufacturing strategies. In that context, the drop in the value of the lira and the political stand-off between presidents Erdogan and Trump must make for an uncomfortable and challenging working environment for the industry’s management.

The fall in the lira theoretically makes exports more competitive but imported components will cost more. In that regard, the vertically integrated nature of some of the Turkish operations will help, but Toyota imports engines from the UK, as do Ford and Honda. These companies can, of course, mitigate such financial issues through internal accounting and transfer pricing mechanisms, but having significant production assets in a market fraught with political and economic tension and uncertainty is hardly an attractive proposition.

Add-on investmentsUntil now, the vehicle companies have maintained their investments and indeed added to them in recent times; and the new Hyundai SUV mentioned above suggests that the Korean company is expecting the country’s current problems to be resolved. But by when?

Last year, Ford committed a modest $52m to expand its plant, and Honda has done the same to make its factory capable of making the new Civic sedan. That said, the English language version of Hurriyet, one of the leading press outlets in the country, recently pointed out that there has actually been no greenfield investment in Turkey’s automotive manufacturing sector for over 20 years.

Honda and Hyundai started production there in 1997 and other countries in the wider region have seen some significant investment. BMW is building a new plant in Hungary while Mercedes also expands operations there. At the same time, PSA and Renault are building massive operations in north Africa. By contrast, Turkey has had to make do with the existing operations and add-on investments.

Such operations are not to be sniffed at but with the political and economic crisis where it is, there is little chance of Turkey winning major all-new investment for some time to come. In fact, it should be worried about the potential implications of the collapse in relations with the US for its manufacturing industries.

President Trump has slapped a 25% tariff on Turkish steel and Turkey has responded with a range of tariffs on imports, including US car imports. These are not that high, however – around 6,000-7,000 a year (mainly SUVs from Jeep, BMW and Mercedes) – so this is hardly going to impact on the US economy. But with nearly 7,500 Promaster City vans (made by Fiat’s Turkish partner, Tofas) and nearly 30,000 Toyota C-HRs shipped to the US in the first seven months of 2018 alone, the total annual value of these two (US supply) contracts is at least $1.5 billion or 5% (and possibly more) of the industry’s total exports for the year.

Anything can happenIt may seem an unlikely prospect, but just how will the industry respond to (or cope with) an extension of the sanctions that President Trump has imposed on Iran to Turkey?

Ford, FCA, Toyota, Hyundai and Honda all have significant investments in Turkey, as well as substantial business in the US. So should they be worried about the status of their Turkish plants? It would seem reasonable for them to consider the matter, since nothing can be ruled out with this US president’s erratic and unpredictable behaviour.

As if that was not enough of a worry, the Turkish auto industry also has to contend with the still uncertain nature of Brexit. Despite being outside the EU, Turkey will be far from immune to the practical consequences of Brexit.

Ford, Toyota and Honda can ship engines from the UK to Turkey by sea (and to a large degree this happens already), so trans-EU land transport problems can be obviated, albeit at additional cost and time. But what happens to the significant UK content level of models made in Turkey which are then shipped into the EU? Will this make the EU/Turkish content of these vehicles too low for zero tariffs under the EU-Turkey customs union agreement? Will non-EU made engines need additional testing and approval to remain compliant, once the UK leaves the EU? Will entire vehicle lines need to be re-homologated?

These are just a few of the questions that the production and manufacturing planners in Turkey – and at these vehicle companies’ headquarters – will be wrestling with just now.

It may turn out to be alright in the end, of course, but given all these issues, that’s far from certain – and behind the defiant political rhetoric from Ankara, there must be some worry as to the country’s economic future and the potential for further investment by the global auto industry in Turkey.