Subaru extends lease for operations at port of Vancouver to 2030 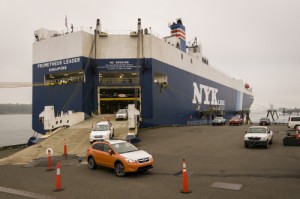 Subaru of America has extended its lease at the US port of Vancouver until 2030 with two additional five-year options that could extend its tenancy there for a further ten years. The carmaker’s lease was due to have expired on August 31, 2020.

The carmaker leases around 16 hectares from the port of Vancouver and works with its terminal processor, Auto Warehousing Company (AWC), to import, process and distribute vehicles to the US. The company has been at the port since 1992 and last year moved almost 82,000 vehicles through it, which was an 18% increase over 2013. In 2014 the port handled Subaru vehicles exclusively (though in 2013 it also handled 857 units for Western Star Trucks made by Freightliner).

“I was here, working at the port, when the first Subaru rolled off the ship,” said Board of Commission president, Nancy Baker. “It’s grown so much, and we celebrated our one-millionth car last summer. I think we’re doing a very good job putting (Subaru’s leasehold) to work and bringing benefit to this community.”

According to the port around 60% of Subarus processed there there by AWC are loaded onto rail cars provided and serviced by BNSF Railway, while the rest are transported by truck. United Road Services, another port tenant, transports vehicles by truck to dealers in the Pacific Northwest.

Mark Berg, AWC's director of sales and marketing, said that the company was pleased that Subaru was able to complete the new 10-year agreement with the port of Vancouver and added that AWC plans to be the long-term processing partner with the carmaker for many more years to come.

"We have always enjoyed long term agreements as it shows a commitment by both companies to perform an outstanding level of services for each other," Berg told Automotive Logistics.  "The 2015 volume projections for Subaru in Vancouver for AWC to handle is around 100,000 units and we anticipate steady continued growth as well."

Revenue to the port over the remainder of the lease is expected to exceed $7m said the port of Vancouver in a statement.