Supply Chain Conference: Only the data and technology you can handle 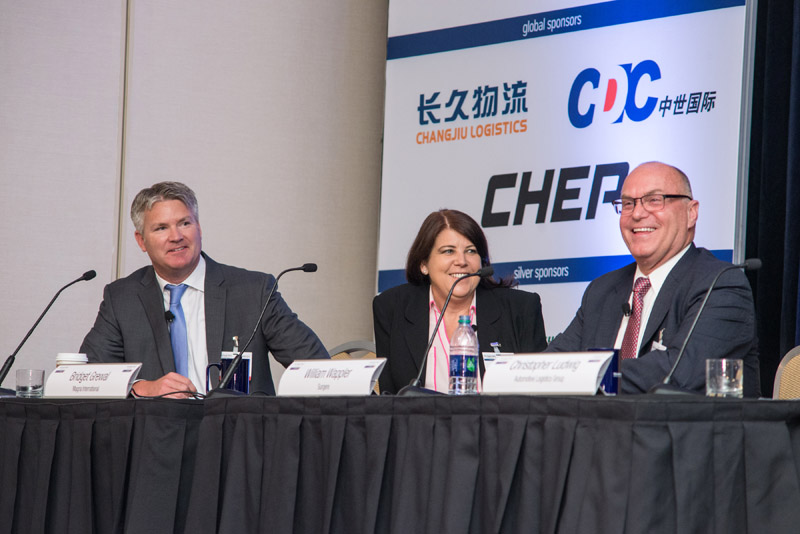 Speakers at the Automotive Logistics Supply Chain Conference in Atlanta were optimistic about the potential for data analysis and new digital technology to improve the supply chain. But Marcus Williams and Christopher Ludwig find most companies are cautious about too much change too fast[sta_anchor id="1"]

Digital technology promises to bring big changes to the automotive industry, but the plethora of data sets drawn from the growing number of information-sensing devices needs the right filtering and analysis if it is to be accurate and in any way useful. The problem with ‘Big Data’ is that, for some automotive supply chains, it can be too big, unless it is applied and understood usefully.

While there are certainly aspects of the automotive industry that are increasingly looking into Big Data possibilities and predictive analytics, especially in forecasting and sales planning, for logistics it might be that most manufacturers and providers are still more comfortable in big data with lowercase letters, and in making better use of existing systems and information.

For one thing, many carmakers are still stuck with old, legacy systems for enterprise and manufacturing resource planning. Harry Chase, director of business development for Schnellecke Logistics, a provider of warehousing and plant logistics services, pointed out that such systems are often “cumbersome”, with many 30 years old or more.

Some companies are either too afraid to move away from such systems, in part because they have based so many of their existing processes around them. Even in cases where a manufacturer decides to invest in a new system, some companies are guilty of a “we’re unique syndrome” that leads the company to create so many bespoke and specific elements that the system comes to resemble older ones.

“Such in-house development of systems can turn a new IT systems into a legacy system,” said Chase, who has worked for manufacturers including Hyundai and Whirlpool.

Vijay Bharadwaj, manager of global logistics engineering and strategic solutions at General Motors, admitted that the carmaker, like many others, suffered from a lack of standards and integration across its myriad of IT systems, including for forecasting, network design, tracking freight, warehouse and yard management, and freight billing.

“We now have a global project looking at how we can better standardise and integrate our logistics systems,” he revealed. 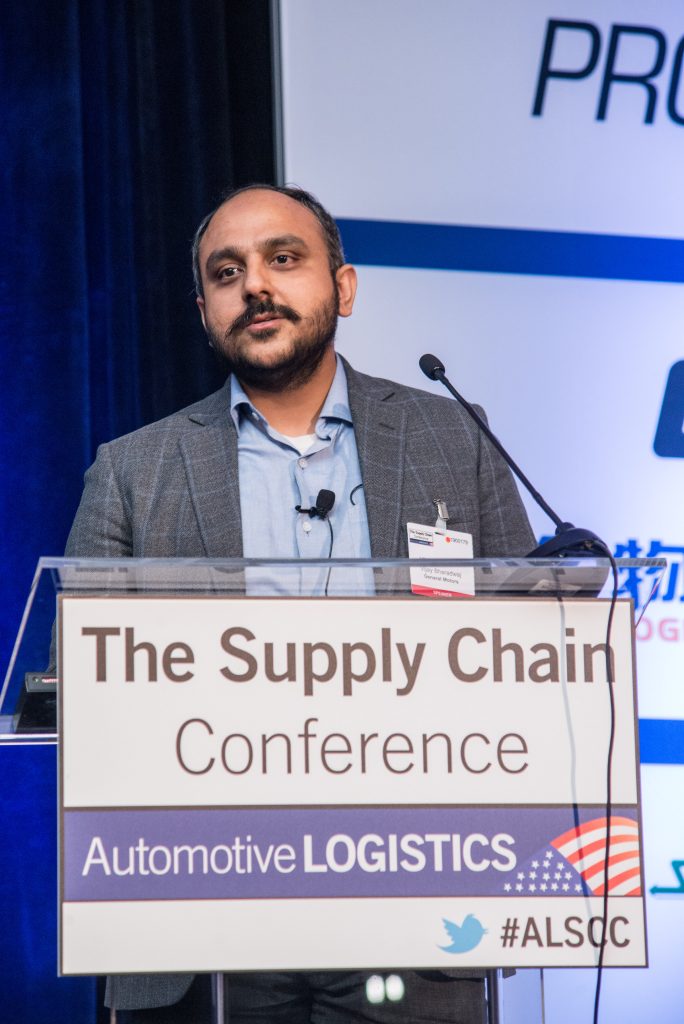 “A lot of technology resides with our providers but we are moving toward integrated design and visibility,” said Bharadwaj. “There are tools out there and we are looking for which ones are the best. We are looking at changing the tools to suit us.”

He also said it was crucial to look at how new technologies could transform the supply chain, such as geocoding and telematics that could support real time visibility.

“Big data needs to integrated for the best result,” he said. “You need to know how to make sure the data is standardised across the modes so it can be integrated. That way you can get more accuracy and on time delivery.”

“We're in a new dynamic,” he said. “I would submit that we are about to embrace a change to the supply chain more important than anything else that is happening in automotive.”

Drawing on technology that includes GPS, GSM (cellular), RFID and NFC (near field communication) – and the multi-layering potential of all these systems – those working in the automotive supply chain will have more access to data and real time information across the supply chain. With the right leadership and funding, Wappler suggested there were big efficiencies to be gained. For Surgere, which offers RFID technology to track returnable containers, the industry is starting to show more interest. In the last year, four OEMs and eight tier suppliers have started trials or projects with the company.

“We use RFID but there has to be a baseline technology that gives you a lot of good data,” said Wappler. “To transform the business you need to look at a container differently. We said they are floating data points. They can tell you dwell times and locations for instance and provide a lot of the information people need to know to bring greater efficiency.”

Small data, for now[sta_anchor id="2"]The use of at least careful data analysis, if not exactly ‘big data’, is showing results among some manufacturers. While he was keen to moderate claims for a big data revolution at his company, Ben Shain, Nissan North America's director of logistics, said the carmaker was reliant on greater input of data across all of its departments.

Shain pointed to a number of supply chain successes over the past year. Nissan North America has improved damage free delivery of vehicles to a level of 99.7%, meaning it has moved from having one vehicle damaged out of every 300 delivered to having one damaged out of every 344. It has also improved on-time performance as well as trimming lead times by gathering data on where vehicles were spending more dwell time and addressing it.

“We trimmed a half of day in terms of our lead time,” said Shain. “We went through a lot of the track-and-trace data that we had on our vehicles and looked at where the dwell was. We looked at the opportunities for better scheduling and connections in terms of the railroad and so forth.”

Shain said there had also been improvements on the inbound side, including a 4% improvement on Nissan's truck fill ratio, which had helped to eliminate 270 truck deliveries going into its US plants last year. 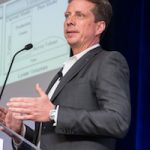 "Drones may be okay for small packages, but I’m not sure we want to think about moving engines and transmissions with them right now. Likewise, we see the possibility to use 3D printing for some slow-moving parts, but it really depends." - Helmut Nittmann, Ford Customer Service Division

Nissan is also using data to improve on-time performance for inbound deliveries. “In the past we have not had a penalty for early deliveries but, as we grow plant volumes and get more space constraints, we have to optimise on the inbound side so we are tightening that delivery window.”

Shain also added that the carmaker was interested in exploring projects in big data, including in collaboration with other OEMs and tier suppliers. He further revealed that Nissan is already in the process of exploring some pilots to automate the tracking of returnable packaging.

Magna International is also using data to make improvements under the direction of Bridget Grewal, packaging continuous improvement manager – although not necessarily using the latest technology. She explained that Magna was decentralised in terms of its packaging and transport organisation, and has historically been immature in terms of container pooling. However, it was willing to look for synergies for greater optimisation.

“I talked to my plants and said, if you gave me some data, I will be able to take that data and give you some focal points on where you can save some money and you should be able to do this without too much resource dedicated toward it.” 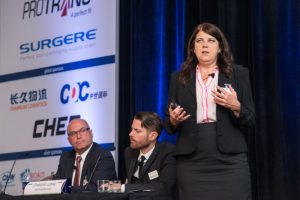 Grewal finally convinced her colleagues and now the company has a pooling model, and to use a packaging management system that includes a ‘plan for every part’, designating specific volume and part per container per year, and looking for consolidation opportunities. In one example, rather than shifting containers full and empty between plants in Saltillo, Mexico and Detroit, Magna is now using crossdocks between its plants and local suppliers to make sure that containers are moving full.

Grewal, who needs to pitch Magna’s 130 plants in North America to join the pooling, has opted not to use RFID or automated readings to manage the container system, both for cost and practical reasons. Instead, she is using people to scan barcodes, and relying instead on EDI and ASN messages. “It’s an easier transition and business case, especially as it is a project for which we started with no budget,” she said.

Despite that lack of budget, Grewal estimates that Magna will save around $25m this year in avoiding empty packaging and transport waste.

Innovation needs a business case[sta_anchor id="3"]This caution about rushing headfirst into new technologies is fairly prevalent among automotive supply chain executives. Schnellecke’s Harry Chase, for example, noted reluctance among carmakers to introduce some of the latest mobile technology for a mix of cost and security reasons. However, he did point to a number of innovations that the company had begun using, together with its customers, to improve productivity.

For example, Schnellecke has been using Google Glass technology to allow workers to pick and sort parts with two hands, as the information is displayed automatically on the glasses, or can be used to scan barcodes. The company is already using it in Germany and has also been trialling it at locations in Mexico. 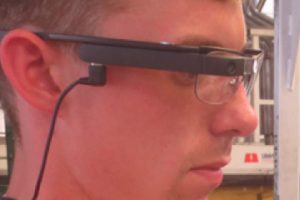 Schnellecke has also been using drones in some locations to carry out inventory cycle counts in either large yards or warehouses. In Mexico, for example, the company’s use of drones at a major distribution centre for Danone, a French yoghurt company, was allowing it to provide weekly stock reports rather than just one per quarter, for example.

Important advances are also being made in the use of automatic guided vehicles (AGVs), added Chase, to move material within plants and warehouses. “Especially vision-control AGVs are allowing manufacturers to use AGVs without having to lay down magnetic strips or rail lines, and so can be more flexible and help to keep the line side clean,” he said.

Other executives were keen to point out that they were not “afraid” of innovative technology, but that there needed to be a strong business case. Paulo Monteiro, inbound logistics manager at Volkswagen’s production plant in Chattanooga, Tennessee, pointed to trials that even included using a drone in yards that could carry equipment weighing up to 50 pounds (22.5 kilos).

“The technology is advancing fantastically and where it makes business sense, we will adopt it,” he said. “But we have a responsibility for our shareholders, and we can't spend just to be innovative.”

Helmut Nittmann, global director of parts supply and logistics at the Ford Customer Service Division, agreed that having a good business case must take precedent. He said that Ford was open to innovation and technology in a range of areas, from drones to 3D printing, but that the company had to be careful.

“Drones may be okay for small packages, but I’m not sure we want to think about moving engines and transmissions with them right now,” he said. “Likewise, we see the possibility to use 3D printing for some slow-moving parts, but it really depends. I can’t see us 3D printing textiles. And for high volume parts, 3D printing is not currently anywhere near fast enough for us to use.”