Volkswagen Group’s commercial vehicle division, Traton, has signed a joint venture (JV) with Japanese truck and bus maker, Hino Motors, aimed at sharing procurement of a wide range of parts and technologies. The partnership, called Hino & Traton Global Procurement, would expand the supplier base, particularly in Europe and Asia, the companies said. Traton holds a 51% stake in the venture and Hino 49%. 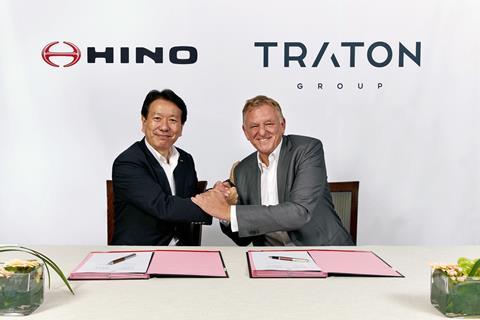 Hino signed an agreement with VW’s commercial vehicle division in 2018 (then VW Bus & Truck) aimed at cooperation across procurement, technology, logistics and transport. Part of the goal of that agreement, which this latest venture builds on, is to help grow global sales to 300,000 by 2025 (from 185,000 in 2017).

The JV’s strategy is to locate parts supply nearer to the point of manufacture and for Hino, reducing large commercial vehicle parts exports from Japan will bring cost efficiencies. In its investment plan – Envisioning 2025 – published last year, Hino indicates that its manufacturing policy is to produce vehicles closer to customers and reduce lead times as well as export price-competitive models to other emerging economies, something Hino & Traton Global Procurement is geared toward.

It also means that by sharing a supply base, Hino and Traton can source higher value parts while reducing cost through bigger volume purchases.

“We cannot keep on exporting a big volume of parts from Japan to our non-Japanese manufacturing plants, so we need an expanded supplier base and to enhance our global optimum procurement capability,” said a spokesperson for Hino.

“We are also in talks with Traton about additional areas of collaboration announced in September 2018, which also aims to join forces in the area of electric mobility.”