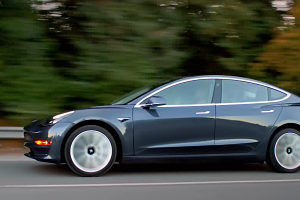 Tesla has delayed the unveiling event for its electric truck by about three weeks as management diverts resources to address bottlenecks in the manufacturing of its Model 3 vehicle, as well as to increase battery production for storm hit Puerto Rico.

This is according to a Tweet last Friday, by the company’s CEO and founder, Elon Musk who said the Tesla semi-truck would now be unveiled on November 16th and not October 26th as originally planned.

The news comes after a poor first update of production for the company’s first mass market vehicle in which just 260 were built since manufacturing started in July.

At the handover event for the first vehicles in late July, Musk admitted the company faced a ‘production hell’ in ramping up manufacturing rates.

Tesla had previously said that it should be able to achieve production of around 1,500 Model 3 cars during the quarter, increasing to a rate of 5,000 a week by year-end.

“Although the vast majority of manufacturing subsystems at both our California car plant and our Nevada gigafactory are able to operate at high rate, a handful have taken longer to activate than expected,” said the company in its latest vehicle deliveries and production update for the three months to the end of September.

“It is important to emphasise that there are no fundamental issues with the Model 3 production or supply chain. We understand what needs to be fixed and we are confident of addressing the manufacturing bottleneck issues in the near-term,” added the company in the statement.

Meanwhile, deliveries of the company’s other two vehicle models, the Model X and S, were up strongly, achieving an all-time best quarter for deliveries at 25,930 units.