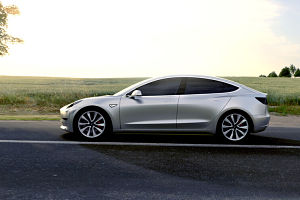 Tesla, which is about to shift into a mass production phase, has told investors it is on track to begin delivering its Model 3 electric vehicle (pictured) from July this year.

The new car will see the company shift from being an 84,000 car per year producer to one manufacturing over 500,000 vehicles annually in just two years.

The company spent invested $522m in capital expenditures during 2016, allocated towards Model 3 manufacturing capacity, its battery ‘gigafactory ‘ in Nevada and for expanding customer support infrastructure.

The company expects to invest between $2 billion and $2.5 billion in capital expenditures ahead of the start of Model 3 production.

Elon Musk, the company’s CEO said on a conference call that the Model 3 was designed for manufacturing, saying it was a “simpler” car than the S and X Models that preceded it.

“A lot of the bells and whistles from the Model S and X are not present on the Model 3,” he said. “These reduce the risk substantially in the ramp up and make it easier to scale. It is a simpler design and we also understand manufacturing a lot better than we did in the past.”

The company has also made significant headway with regards to suppliers, now that the company is more established.

“Whenever we were trying to get supplies for the Model S, a lot of the top tier suppliers wouldn’t even work with us," said Musk. "They thought we would go bankrupt.”

Musk added that the company would also look to focus changes to its global supply chain in order to minimise the risk of supply stoppages due to unforeseen events.

“We are going to increasingly over time rationalise our supply chain to minimise the Force Majeure risk.”

In manufacturing there have been improvements too, with a lot more automation than for the other models, according to Musk.

“Also I refocused most of Tesla engineering, including design engineering into designing the factory," he said. "In the future the factory will be a more important product than the car itself. Our goal is to be the best manufacturer on earth. We are making good progress in that direction.”

In November 2016, the company acquired Grohmann Engineering, an automated manufacturing specialist, for an undisclosed sum.

Installation of Model 3 manufacturing equipment is underway at the manufacturing facility in Fremont, California and at its ‘gigafactory’ in Nevada where, in January, production of battery cells for energy storage products will start. These cells have the have the same form-factor as the cells that will be used in Model 3.

In January it was revealed Tesla planned to invest $350m in its ‘gigafactory’ in Nevada to allow it to manufacture the drive units for the Model 3.

Moving Model 3 motor production to Nevada should allow the company to maximise space in Fremont for the manufacture and assembly of more vehicles. The drive units produced in Nevada will include rotors, stators, inverters and gearboxes.

The company said it will also finalise locations for the third, fourth and possibly fifth gigafactories. The second gigafactory is the Tesla solar plant in New York.

Musk has previously said the company was planning a gigafactory in Europe.

Tesla’s chief technical officer, JB Straubel, said the company had learned a lot from some of the “difficult” ramp ups of the other models and were “helpful” in preparing for the Model 3.

“A lot of the things that we could identify as the bottlenecks that hurt us on the X ramp we have been able to target specifically and reduce or eliminate,” said Straubel.