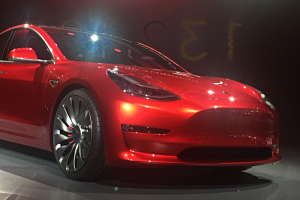 Electric car manufacturer Tesla plans to invest $350m in its ‘gigafactory’ in Nevada to allow it to manufacture the drive units for its newest product, the Model 3.

In his annual ‘state of the state’ address last week, Nevada governor Brian Sandoval announced the planned investment and said it would lead to the creation of an additional 550 jobs at the site.

Up to now, Tesla has manufactured and assembled its Model S and Model X at the Fremont plant in California, reaching an annualised rate of more than 100,000 a year by the end of June last year. The company acquired the former Toyota and General Motors owned plant in 2010.

The production rate will increase materially with the launch of the Model 3, expected later this year, which has generated over 400,000 in advance orders.

Moving Model 3 motor production to Nevada should allow the company to maximise space in Fremont for the manufacture and assembly of more vehicles. The drive units produced in Nevada will include rotors, stators, inverters and gearboxes.

Centralising manufacturing of the Model 3 powertrain at a single location will also provide logistics and cost efficiencies.

Motor production for the Model S and Model X will remain in Fremont, however.

The $350m investment and 550 new jobs are just part of an overall $3.5 billion spend and 6,500 new jobs Tesla has planned for the gigafactory under its original agreement with the state.

In September 2014, Tesla announced Nevada as the location for the gigafactory, which when completed will be the world’s largest lithium-ion battery factory and also the largest building on earth.